Oct 7, 2017 7:53 PM PHT
Agence France-Presse
Facebook Twitter Copy URL
Copied
Simona Halep is number one for the first time, and can top her stay in China off with a title win 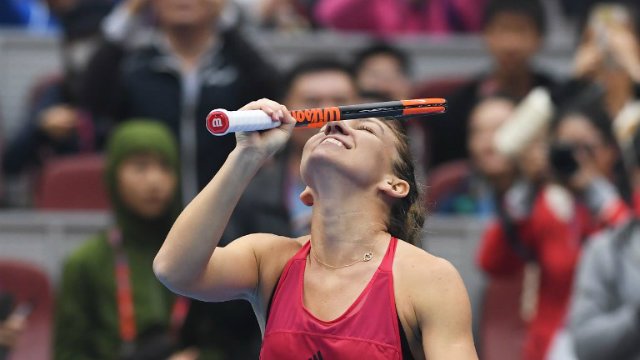 BEIJING, China – Emotional Simona Halep called it the best day of her life as she surged to number one in the world for the first time after reaching the China Open final on Saturday, October 7.

The Romanian, who said her next goal was to win a maiden Grand Slam, defeated Latvia’s Jelena Ostapenko 6-2, 6-4 in their semi-final.

Her ousting of Spaniard Garbine Muguruza at the top of the women’s game will be officially confirmed on Monday when the latest rankings are released.

The 26-year-old Halep is the fifth woman to hold top spot this year, but the first Romanian in the history of the WTA.

She smiled broadly, then cried and was presented with a flower arrangement in the figure “1” – which she hugged tightly – to celebrate the landmark moment.

“My dream is true now, in that moment you cannot believe 100 percent that it’s happening, so I was in tears a little bit,” she said.

“Maybe first time on court (to cry) nice tears… It’s the best moment in my life and I want just to keep it.

“Now tomorrow already I have just to restart everything, to start again to play the same and to work harder.

“And I have a few more dreams in my career.”

Asked by AFP what those were, she smiled: “I tell you one, only one: to win a Grand Slam, which you know.”

Halep saw off former number one Maria Sharapova earlier this week in Beijing and Saturday’s defeat of Ostapenko had a whiff of revenge – the 20-year-old won their duel in the French Open final earlier this year.

Halep will face either Caroline Garcia of France or Petra Kvitova of the Czech Republic in Sunday’s China Open final.

She was always in control against the world number eight Ostapenko and put herself on the way to victory when she broke the talented Latvian in the first game of the first set.

Halep’s ascension to the top brings Muguruza’s four-week reign as number one to an end, while the others who held the honour in 2017 are Angelique Kerber, Serena Williams and Karolina Pliskova.

The outstanding Williams is temporarily out of tennis after having her first child.

In the lead-up to Beijing, Halep said she was unconcerned about becoming world number one, but admitted with a grin: “Of course I wanted it.

“When I was 5 points away I felt that I want it more and more.” – Rappler.com