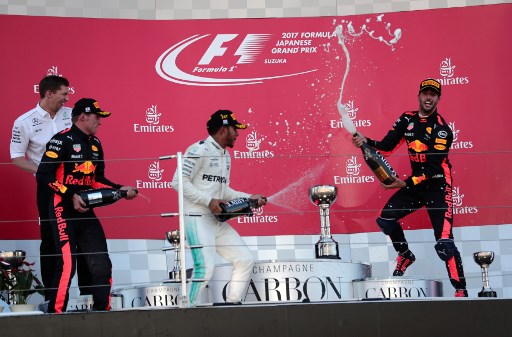 SUZUKA, Japan – A rampant Lewis Hamilton has fired a warning to Formula One’s baby-faced new generation of drivers, telling them he’s still the man to beat.

The Briton took a giant step to a fourth world title by steering his Mercedes to victory in Japan on Sunday, October 8, opening a 59-point lead over Sebastian Vettel with just 4 races left this season.

With Vettel’s Ferrari seemingly cursed by mechanical gremlins, mathematically Hamilton could be crowned champion at the next race in Austin, Texas.

But Hamilton confessed that he feels old when cherubic boy racers such as Red Bull’s Max Verstappen loom in his mirrors.

“I was driving down the back straight at one point and I’m thinking: Jeez, the guy behind me is so much younger than me,” the 32-year-old said after a late charge from Verstappen at Suzuka.

“I’ve got to make sure I kind of man up, show my age and make sure that I stay ahead,” added Hamilton after his 61st Formula One victory.

“To show that I’m actually still very young at heart. That was kind of my thought process for you behind.”

Verstappen, 20, who stunned Hamilton to win his second F1 race win in Malaysia a week earlier, shot back:

“I was thinking: this guy’s so old in front of me!”

Despite the jocular tone, Hamilton was clearly not messing around after getting his mojo back in Japan.

“He won the last race – I’m not letting him have this one,” he said.

“We all know quick Max is, he’s doing a great job. I’m enjoying being in an era with such great young talent coming through,” added Hamilton, insisting he was not about to allow the Dutchman to knock him off his perch.

“He will be here far beyond after I stop. But until then, I will try and not give him too many poles or too many wins.”

But Hamilton still dominates the sport and has hit back with a vengeance this year after the disappointment of losing the title to ex-team mate Nico Rosberg in 2016.

“It’s almost unbelievable to think of where we are in the championship,” said Hamilton, who has won half of the season’s 16 races to date.

“There’s not really any need to change my approach, I’m just going to keep my head down,” he added.

“I think if sometimes you come off the gas a little bit you actually cause yourself more trouble than you need.”

Mercedes team boss Toto Wolff called Hamilton “one of the best of all time” after he extended his Formula One pole record to 71 on Saturday.

“We take no prisoners in how we claim our points,” he said. “This was another perfect performance from Lewis. We must take the next races one at a time, push to better understand the car and keep our humble attitude.”

Hamilton, meanwhile, knows only one way.

“There’s a long way to go,” he said, despite clear evidence to the contrary.

“I’m still going to keep the pedal to the metal.” – Rappler.com