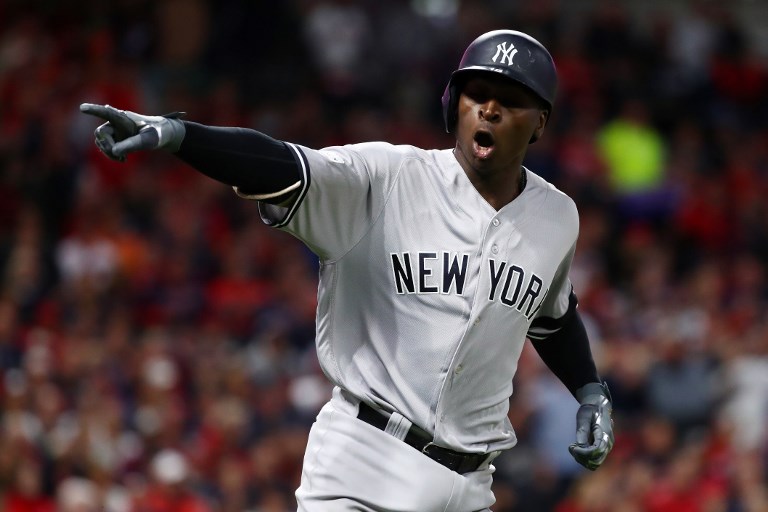 After losing the first two games, the Yankees rallied to defeat the Indians 3-2 in the best-of-5 American League Division Series.

Gregorius smacked a solo homer in the first inning and a two-run homer in the third to give the Yankees a 3-0 lead. And after the Indians trimmed the margin to a single run, Brett Gardner added a two-run single in the ninth inning to produce the final margin.

“Didi is the one that set the tone,” said Gardner. “Didi had two big homers for us. Huge win.”

The victory lifted New York into the best-of-7 American League Championship Series against the Houston Astros that opens Friday in Texas. Houston went 5-2 during the regular season against the Yankees.

In the National League, Washington’s Michael A. Taylor smashed a grand slam in the eighth inning to power the Nationals over the defending World Series champion Chicago Cubs 5-0, leveling the best-of-five National League Division Series at 2-2.

The victory set up a winner-take-all fifth game Thursday at Washington, with the victor advancing to the National League Championship Series against the Los Angeles Dodgers. That best-of-seven showdown begins Saturday in California.

Nationals right-handed pitcher Stephen Strasburg, who had been the focus of a pre-game drama about whether he would take the mound for the biggest game of his career, collected his first playoff triumph despite battling fever and chills a day earlier.

Strasburg struck out 12 and surrendered only three hits with two walks over seven shutout innings. He kept the Cubs hitless for the first 5 2/3 innings.

“I’m surprised I was able to hang in there,” Strasburg said. “I think it’s just one of those situations where you try and break the game down, keep it simple and just know going in, whatever I have in the tank, I’m giving it everything I have.”

At Cleveland, Gregorius launched the Yankees to the early lead, but the Indians answered in the fourth as Austin Jackson singled, advanced on a Jay Bruce single and scored on a Roberto Perez single.

Giovanny Urshela singled in Bruce to pull Cleveland within 3-2 and the Yankees removed winning pitcher C.C. Sabathia for reliever David Robertson, who halted the threat by inducing an inning-ending double play.

Gardner smacked a two-run single to right field on the 12th pitch he saw in the ninth inning to add insurance runs for the Yankees and closing reliever Aroldis Chapman got the final 6 outs for New York to earn the save.

“Just looking for a good pitch to hit, something out over (the plate),” Taylor said. “Just trying to put the bat on the ball and make something happen.”

Washington took a 1-0 lead in the third inning when Trea Turner doubled to left field, took third on a wild pitch and scored on a fielding error by Cubs shortstop Addison Russell off a ball hit by Ryan Zimmerman.

But in the eighth, Daniel Murphy singled while Anthony Rendon and Matt Wieters walked, setting the stage for Taylor’s homer over the right-centerfield wall.

Taylor paid tribute to Strasburg’s effort after originally planning to sit out due to illness and let Tanner Roark make the start.

“To come out after being sick like that and put together a game like that, it’s amazing,” Taylor said. “He’s the real deal.” – Rappler.com