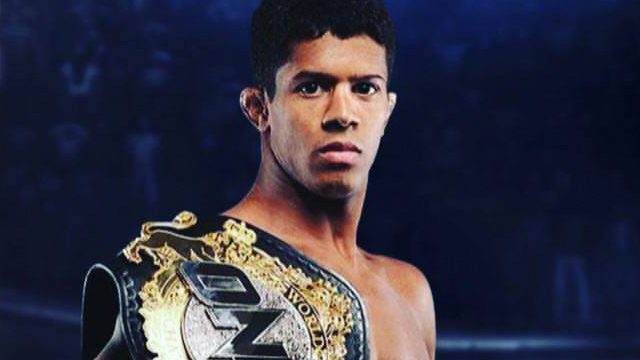 Facebook Twitter Copy URL
Copied
The Brazilian displays his superior ground game by swarming local boy Kingad, who submitted to a choke with still 15 seconds remaining in the opening round

MANILA, Philippines — Unfazed by the hometown crowd, Adriano Moraes successfully defended his ONE flyweight championship by submitting his challenger Danny Kingad, during the co-main event of ONE: Legends Of The World, at the Mall of Asia Arena, in Pasay, Friday, November 10.

With just two minutes left, the champ blocked Kingad’s leg kick and dropped him with a counter right

Moraes then showcased his superior ground game when he swarmed Kingad and submitted the challenger with a rear-naked choke with still 15 seconds remaining in the opening round.

The visiting champion thanked the Filipino fans after the fight. “Good evening, Manila thank you very much for this amazing night,” he shouted with excitement.

The disappointing loss brings Kingad, 5-1, back at the end of the flyweight division’s line.

Moraes, 17-2, once lost the ONE Championship flyweight title to Kazakhstan’s Kairat Akhmetov back in 2015, but he came back last August to reclaim it and avenge his defeat.

The champ gave his message to the young Team Lakay fighter during the post-fight interview: “You have a big future forward but tonight is my night.”  – Rappler.com