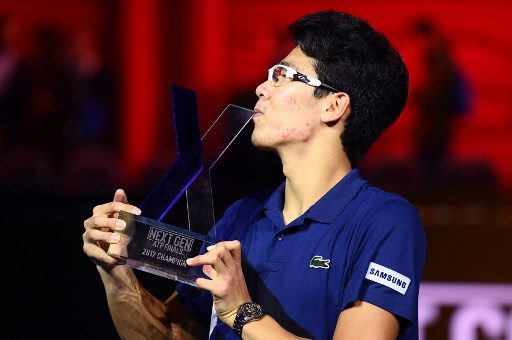 Chung, ranked 54, sealed victory on his 3rd match point after Rublev had saved two at 3-1 down in the 4th set of the final at the season-ending, 8-player tournament.

“After losing the first set, and down one break in the second, I was really nervous, really angry, but I tried to have a poker face,” said Chung.

“I’m trying to create an image of being really strong mentally and I starting playing better and better,” he said.

The former student of the Nick Bollettieri Tennis Academy in Florida – who turned to a mental coach to help him deal with the pressure of tennis – received $390,000 dollars (335,000 euros) but no world ranking points for winning the under-21 tournament.

Chung revealed that his mind training had helped him in Milan, just days after he had suffered a first-round exit in Paris to Rafael Nadal.

“The coach says all the time, first try to stay calm and in control, to have a chance to play better and better.”

It was Chung’s third victory over Rublev. He beat the Russian earlier in the week and also at Winston-Salem on the ATP Tour in August.

The Russian said he had let his emotions take control.

“I was playing much better than him. I was dictating the match, and then just because I let my emotion out and everything changed, because Chung, he was always there,” said Rublev.

“No matter if something goes wrong, he was still fighting. And me, from a little thing, I just lose my control and that’s it. I just lost because of my head.”

The 6th-seeded Chung won all 3 matches in a group play, including a straight-sets win over Rublev, and defeated Russian Daniil Medvedev in the semi-finals.

The momentum swung his way in the 3rd set as Rublev’s frustration broke through at his inability to wear down Chung.

He becomes the first South Korean to lift an ATP World Tour singles trophy since Lee Hyung-Taik won in 2003 at Sydney.

The ATP used the inaugural tournament to test a number of innovations with the promising young players of the season competing in the round-robin format with the first to four games in each set winning – a tie-break is used when the scores reach 3-3.

Changes also included no line judges with all calls made using Hawk-Eye Live, no lets, sudden-death points at deuce and a shot clock to ensure a 25-second rule between points to keep play ticking along briskly. – Rappler.com