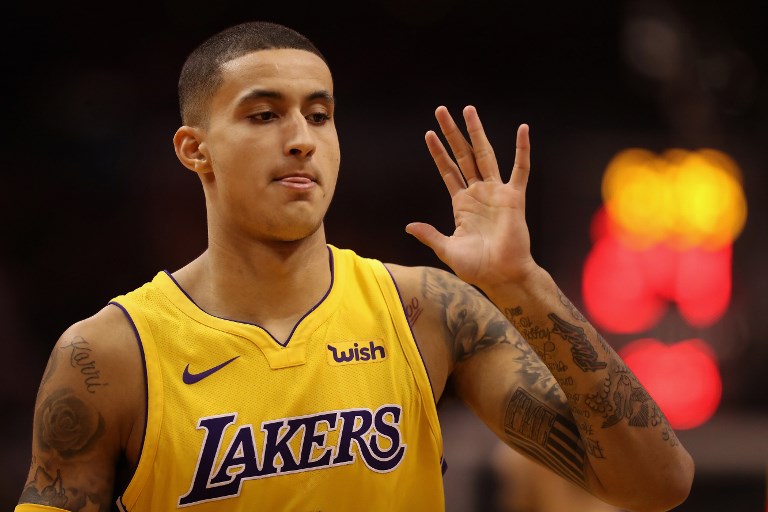 Kuzma scored a NBA career-high 38 points as the Lakers dominated the Rockets early then held on through a mid-game Houston rally to claim the win and end their own three-game losing skid.

The Rockets dropped to 25-5 on the season and also lost for the first time with guard Chris Paul in their lineup.

Paul departed early in the fourth quarter with a sore left leg and did not return after scoring eight points in 25 minutes.

The Lakers improved to 11-18 on the season with Kuzma scoring 24 of his 38 points in the first half on nine-of-nine shooting.

Los Angeles shot 47.1 percent overall and, after entering the game dead last in the NBA in three-point percentage, nailed 15 of 35 attempts from beyond the arc to keep the Rockets in check.

Kuzma got plenty of offensive help as a half dozen Lakers finished in double-digit scoring, including reserve forward Corey Brewer who had a season-high 21 points.

Brewer was shipped by the Rockets to Los Angeles at the trading deadline last February.

Brewer sparked the decisive run with a nifty layup at the 7:04 mark of the fourth quarter to break a 100-100 tie.

The Lakers stretched that lead to 10 points before the Rockets could muster a reply that fell short.

Spurs on a roll

The Spurs shot 51.3 percent from the field and outrebounded Portland 53-38 en route to their 11th win in 14 outings.

Damian Lillard scored 17 points for the Trail Blazers, who lost for the fifth straight time at home.

The Blazers had a chance to win in the final moments, but CJ McCollum’s three-point attempt bounced off the rim as time expired.

Aldridge and Gasol each scored 16 points as San Antonio, shooting 58.1 percent from the field, raced to a 54-46 halftime lead.

In Denver, Jimmy Butler scored 25 points, including 11 in the final 4:41, and the Minnesota Timberwolves rallied to beat Denver 112-104.

In Oklahoma City, Russell Westbrook scored 24 points and grabbed 10 rebounds as the Thunder routed the Utah Jazz 107-79. The Thunder led by as much as 33 points at one point, a season high for them. – Rappler.com