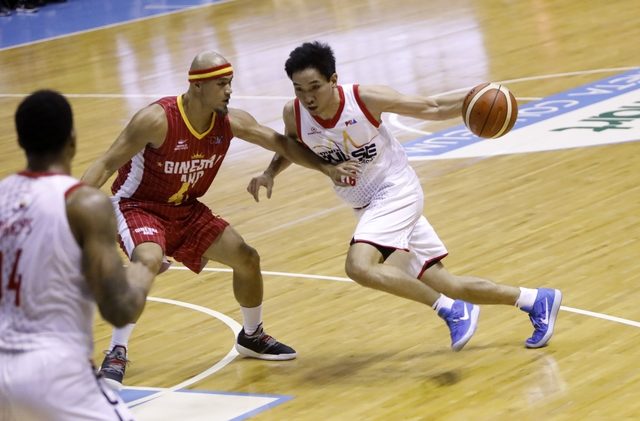 Facebook Twitter Copy URL
Copied
The veteran sharpshooter averaged 11.6 points, 4.4 rebounds and 4.1 assists in 9 games he played for the Fuel Masters in the 2018 PBA Commissioner's Cup

MANILA, Philippines – Barangay Ginebra adds a veteran presence in its final push for a quarterfinals spot in the 2018 PBA Commissioner’s Cup.

The Gin Kings bolstered their outside sniping by acquiring the services of Jeff Chan after trading their 2018 first round pick to the Phoenix Fuel Masters.

Chan averaged 11.6 points on 35% shooting from 3-point distance to go with 4.4 rebounds, 4.1 assists and 1.2 steals in the 9 games he suited up for the Fuel Masters this conference.

His departure will definitely be a tough blow for Phoenix, which already crashed to its 4th straight loss following a 106-108 defeat to the Rain or Shine Elasto Painters last June 16. Phoenix currently holds a 3-6 card.

Meanwhile, the 10-year pro’s arrival to Ginebra adds depth and leadership to the league’s crowd darlings as they seek to win their remaining 3 games to secure a playoff berth after a rousing 104-84 rout of the Magnolia Hotshots last June 17.

The Gin Kings, who carry a 3-5 slate, go for a 3rd win in a row when they meet the Columbian Dyip on Wednesday, June 20, at the Araneta Coliseum.

This is the second time within a year that the sharpshooter is traded after he was shipped to the Fuel Masters last August following an 8-year stint with the Elasto Painters.

It is with Rain or Shine that the native of Bacolod played his best basketball, winning two PBA championships and a Finals Most Valuable Player award to boot.

He is also a two-time All-Star Game MVP and a one-time Second Mythical Team member. – Rappler.com