Quick-learning jins kick their way to the podium 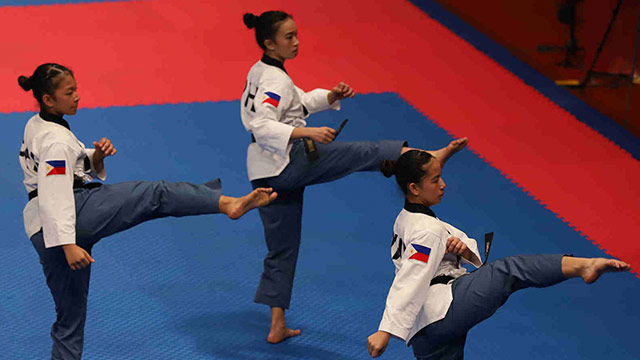 JAKARTA, Indonesia – The introduction of new forms, movements and sequence in the taekwondo poomsae competition had virtually put competitors on equal footing. At least that’s what the Philippine team thinks after bagging the country’s first two medals in the 2018 Asian Games.

The team only had around seven months to learn and master the new techniques, and the Filipino jins admit that it was initially tough.

“Since the poomsae seminar [in February], we already trained with Master Jong, our Korean coach and coach Rani [Ortega] to be familiar with the new poomsae,” said Janna Dominique “Nikki” Oliva of the bronze-winning women’s trio.

Poomsae scores are based on accuracy, power, synchronicity and overall performance.

The men’s triumvirate of Dustin Jacob Mella, Jeordan Dominguez and Rodolfo Reyes Jr bagged a bronze on Sunday, August 19 to put the Philippines on the medal board right on the first day of the continental tournamet. (READ: Men’s poomsae team gives PH first medal in 2018 Asian Games)

The new poomsae was introduced by the World Taekwondo Federation (WTF) in 2017. Hoping to prepare for the Asiad, the Nationals joined tournaments like the 2018 Asian Taekwondo Championships.

The men’s team, despite winning the Southeast Asian Games gold last year, also had a new member in Dominguez.

But clearly, all the gritty preparations paid off.

“Kaya gamay na namin tatlo kasi kaming tatlo nagcompete sa [Asian Championships]. So for the Asian Games, it’s just the competition for the three of us to enjoy,” added Oliva.

(Thre three of us got familiar with the new forms because we all competed in the Asian Championships.S o for the Asian Games, it’s just the competition for the three of us to enjoy)  – Rappler.com