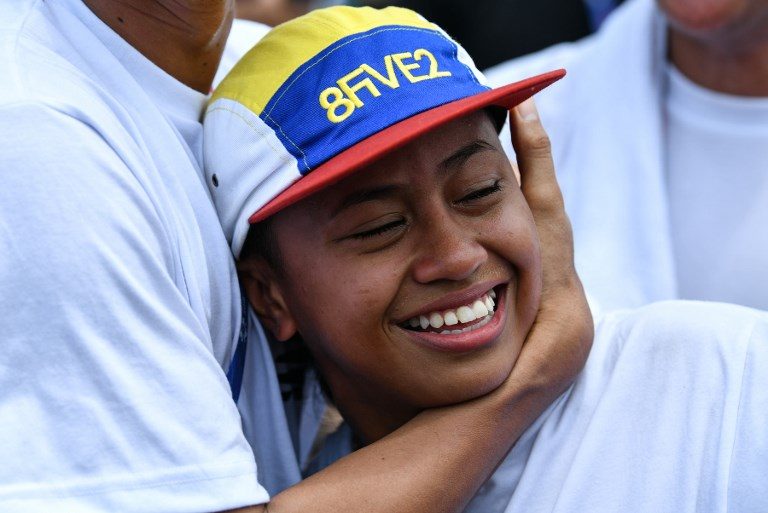 PALEMBANG, Indonesia – She’s the daughter of a carpenter and a sidewalk vendor.

So Margielyn Arda Didal can’t help but tear up after capturing the gold medal in the 2018 Asian Games women’s skateboarding street event.

The 19-year-old Didal brought glory to the country, but the former street kid knew that she also just turned her family’s life around.

Aside from bringing home a gold medal, Didal is set to receive a windfall of incentives worth at least P6 million from the government and private patrons.

“Bibigay ko po sa nanay ko para makapagtayo kami ng small business,” said Didal of her plans of giving her bonus to her mom, a sidewalk vendor of kwek kwek (eggs fried in flour batter) near the Concave Skate Park in Lahug, Cebu City where the athlete was discovered by coach Danny Bautista seven years ago.

(I’ll give it to my mother so we can put up a small business.)

Didal was so dominating that she posted an untouchable top score of 30.4 points for a smashing Asian Games debut. (READ: Margielyn Didal skates to 4th PH gold in 2018 Asian Games)

Japan’s Isa Kaya placed a distant second with 25.0 points from the combined two runs and two top tricks with 25.0 for silver, while 12-year-old Nyimas Bunga of Indonesia took the bronze with a tally of 19.8 in this captivating sport making its maiden appearance in the quadrennial, 45-nation sportsfest.

Didal hopes her victory will put a spotlight on skateboarding – and that it’s about time to take it seriously.

“Gusto ko rin na maipakita na skateboarding is a serious sport but can also be fun as well,” said the young Cebuana.

(I want to show that skateboarding is a serious sport but can also be fun as well.)

A veteran of the prestigious Street League championships in London last May – the first Southeast Asian to be invited to the event – Didal led from start to finish, setting the tone of the lopsided contest with an opening score of 6.7 points, highlighted by a difficult  ”Board Slide” on the railings after taking the higher platform.

Using an 8Five2 yellow skateboard, she displayed her own version of hang time with an “Ollie” on her second run to go comfortably ahead with 14.4 points to second-running Isa’s 13.3.

In the tricks section, where the two best scores out of five tries count, Didal went full throttle with another “Board Slide” to net 6.0 in her initial run, took it easy with a 3.7 output in the second, before wrapping the gold up with eye-popping scores of 7.1 and 8.9 points in the third and fourth attempts.

With a flair for the dramatic, her coup de grace was an acrobatic “Backside 50/50, 360-degree Flip Out” that drew oohs and ahhs from the gallery – an astonishing feat considering that it was the first time she did it in a major international competition.

“This was the first time that Margielyn tried that stunt and is the highest score garnered by any skateboarder so far in the street event,” said Skateboard Association of the Philippines Inc. president Monty Mendigoria.

“I am blessed to witness this great event by a young girl, a carpenter’s daughter and former street kid, who did so well.  Because of her hard work and belief in herself she is now where she is,” said Vargas.

“The country is grateful for [Didal’s] efforts and sacrifices,” said Philippine Sports Commission chairman Butch Ramirez, noting that a hero’s welcome for the country’s  latest sporting sensation has been arranged.

Didal is set to be the Philippine flag-bearer during the Asiad closing ceremony this Sunday, September 2.    – Rappler.com