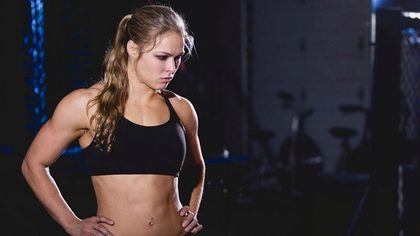 As soon as Ronda Rousey, 25, enters a room, all eyes turn to her as she beams with energy.

Her mere presence is electrifying.

She has all the makings of a star – the round curvature, the sultry smile, the bright and bubbly persona. As she bats her eyes and pouts her lips, she commands the attention of everyone around.

But it’s not what it appears to be.

She’s not a model, a singer or a movie star. Rousey, with a professional record of 5 wins and 0 losses, is the new Strikeforce women’s bantamweight champion of the world.

The fight for however long it lasted, was halted early as she forced Tate to ‘tap out’ by snapping her arm into a 90 degree angle in the wrong direction – a sight not for the faint of heart.

“She is the best woman fighter I have ever seen in my life,” said her grappling coach Gene LeBell, himself a prominent figure in judo since the early 1950’s.

LeBell should be proud of how his pupil completely destroyed her opponent last Saturday night at Strikeforce in Columbus, Ohio.     Tate was certainly no pushover. The former 135 lb. champion was making her first defense and was not intimidated by Rousey’s precedence.

In fact, Tate made a fight out of it and actually landed a few good shots as she rushed Rousey to start the fight. Tate was even able to take Rousey’s back but could not capitalize on the advantage.

Yet Rousey proved to be too good and too much, showing the world that she wasn’t just another hype-job. With the way she controlled Tate using superior technique and strength, it was clear to everyone watching that it was only a matter of time before she caught Tate in a bad position.

Not just another MMA star

Before her Mixed Martial Arts (MMA) career took off, Rousey was a decorated amateur judo practitioner who represented the United States in the 2008 Olympic Games in Beijing, becoming the first American in history to win a medal in women’s judo.

She defeated Annet Bohm of Germany on points to capture bronze.

Being undefeated and virtually unchallenged is nothing new to the sport. Others who came before her have had similar success but not as much publicity.

Rousey’s case however, is a special one.

She is on an 8-fight win streak that spans 3 amateur fights and 5 professional fights with all wins coming by way of first round armbar, needing only less than a minute to dispose of her opponents before meeting Tate last Saturday.

Although the fight with Tate lasted longer than she was used to, the result was the same. It took two attempts to sink in her signature move but was nevertheless still effective.

Rousey’s legendary armbar is becoming inescapable. Opponents know it’s coming but can’t seem to stop it from happening – all thanks to Rousey’s strengths and skills developed through her world-class judo.

Rousey’s victory over Tate not only made headlines in women’s mixed martial arts, it took the sport and placed it in the spotlight, front and center.

A showdown with Sarah Kaufman looms on the horizon.

Kaufman offers an interesting contrast of styles for Rousey as she brings boxing and striking ability to the table.

Indeed, the perfect counter to a great grappler would be an opponent with a better than average stand-up game, a facet of the sport Rousey may need work on. If there is a weakness to point out in Rousey’s overall abilities, it is certainly the stand-up.

Good thing for the fierce fighter, she hasn’t needed to use any of it thus far.

The future indeed looks bright not just for Ronda “Rowdy” Rousey, but for MMA as a whole – particularly women’s MMA.

With Rousey’s amazing performance last weekend, surely new fans have been won over – or more specifically, new fans who are eager to watch the next time Rousey steps into a cage. – Rappler.com