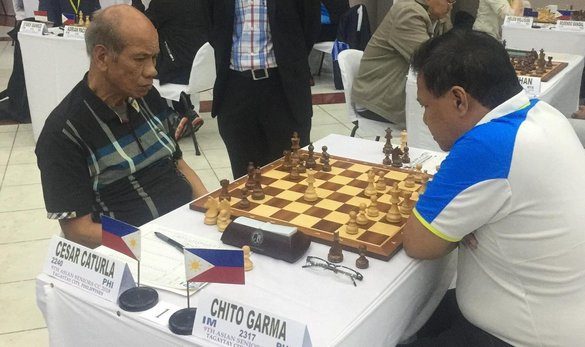 The 54-year-old Garma, who played in the 1990 Novi Sad and 1992 Manila Olympiads, raised his total to 5.5 points after 6 rounds, towing IM Petronio Roca, who subdued Carlo Lorena for 5.0 points in the tournament confined to players over 50 years old.

Torre, pulled down by a fifth-round loss to Garma, settled for a draw with second seed FIDE Master Oleg Rinas, leaving his title-retention drive in jeopardy.

Pacis downed FM Syarif Mahmud while Young and Roullo also split the point in other key 5th round matches of the event which drew a total of 34 players from 9 countries.

Crucial Round 7 matches pit Garma against Roca, Caturla against Young, Torre against Pacis, and Roullo against Oleg.