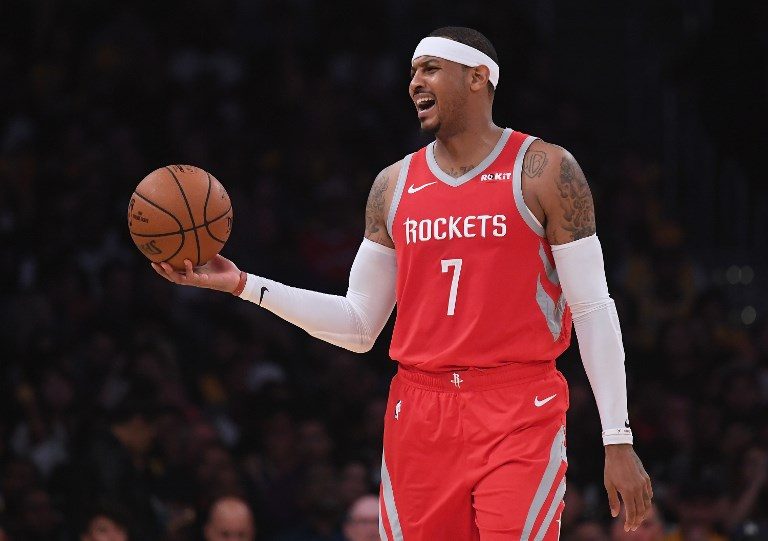 Facebook Twitter Copy URL
Copied
'The fit we envisioned when Carmelo chose to sign with the Rockets has not materialized,' says Houston general manager Daryl Morey

“After much internal discussion, the Rockets will be parting ways with Carmelo Anthony and we are working toward a resolution,” Morey said in a statement on the status of the 10-time All-Star.

“Carmelo had a tremendous approach during his time with the Rockets and accepted every role head coach Mike D’Antoni gave him. The fit we envisioned when Carmelo chose to sign with the Rockets has not materialized, therefore we thought it was best to move on as any other outcome would have been unfair to him.”

The Rockets won a league-leading 65 games last season behind a record-setting offense, but they have sputtered in the early going of this campaign.

They are 12th in the Western Conference at 6-7 and a report surfaced at the weekend that Anthony would be waived after he left the team last Friday.

Morey called that report “innacurate” and said he thought Anthony had come in for “unfair” criticism amid the Rockets’ early season struggles.

Anthony, selected third overall by Denver in the 2003 NBA Draft, signed with Houston as a free agent this year with the aim of contending for a title.

The 34-year-old is one of 11 players in NBA history with career averages of at least 24.0 points, 6.0 rebounds, and 3.0 assists and a three-time Olympic gold medalist. – Rappler.com