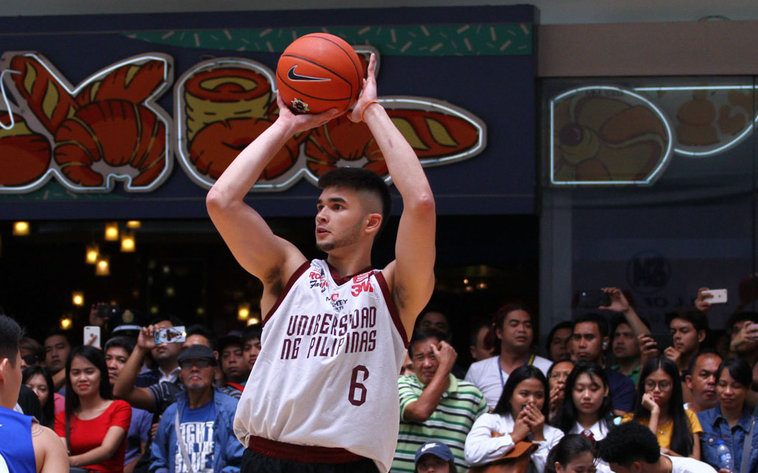 Facebook Twitter Copy URL
Copied
After a month-long absence, Kobe Paras returns from injury with a 15-point showing to power the Maroons

MANILA, Philippines – The UP Fighting Maroons ended their 2019 FilOil Preseason Cup campaign on a high note, drubbing the UST Growling Tigers, 89-72, at the FilOil Flying V Centre in San Juan on Friday, June 7.

UAAP Season 81 MVP Bright Akhuetie pulled out all the stops in this one, churning out 17 points and 16 rebounds despite nursing a bad back. Highly touted recruit Kobe Paras made his return from ankle injury after a month-long absence and dropped 15 points on a 3-of-7 shooting from downtown.

However, the Maroons can’t seem to evade the injury bug as key guards Jun Manzo and David Murrell both went down with identical right ankle injuries in the win. Manzo went down late in the 2nd quarter before Murrell followed suit early in the 4th after a hard fall.

Amid their new set of injuries, Paras carried the Maroons’ offense early in the 3rd with a pair of threes for a 13-point lead, 56-43. However, UST’s new recruit Rhenze Abando kept it close with 3 straight triples of his own, inching within 9 at the 2:37 mark.

Still, UP kept firing on all cylinders in the 4th as UST’s offense sputtered. After a turnaround jumper by Soulemane Chabi Yo at the 4:17 mark, the Maroons sealed the deal down the stretch with a 12-3 run, 89-71, ending with an open three by Javi Gomez de Liano.

Abando showcased his range and led UST with 24 points, 8 rebounds and 3 assists on a 5-of-10 shooting from deep. Chabi Yo churned out a 23-marker, 10-board double-double as the only other Tiger in double-digit scoring.

In the following game, the San Beda Red Lions survived the De La Salle Green Archers, 83-78, to keep their slate clean at 5-0.

James Canlas erupted for 20 points, 15 in the 4th quarter alone, while backcourt mate Evan Nelle chipped in 12 markers and 5 rebounds.

The Archers kept it close until the very end, courtesy of an Andrei Caracut pull-up three at the 1:26 mark to inch within two, 78-80. However, Nelle doused their fire right after as he responded with a dagger step-back three for the 83-78 lead with 66 ticks left.

Caracut led the Archers with 14 points and 7 assists while Justine Baltazar chipped in 14 markers, 7 boards and 3 blocks in the losing effort.

In the other contests, the FEU Tamaraws made quick work of the CSB Blazers, 70-57, while the San Sebastian Stags held back the eight-man CEU Scorpions in a 90-88 double-overtime thriller.

On the other hand, Senegalese big man Malick Diouf saw his 34-point, 23-board monster double-double go to waste as CEU only had 8 players left in their roster. – Rappler.com