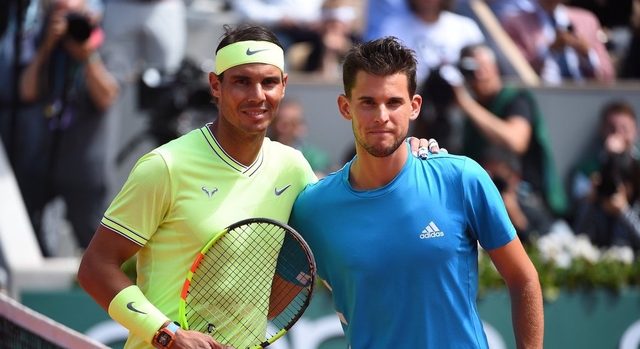 PARIS, France – Rafael Nadal told Dominic Thiem that he will win Roland Garros one day after the Spaniard topped the Austrian in 4 sets to win a 12th French Open and 18th major on Sunday, June 9.

Nadal is now just two behind Roger Federer’s all-time record of 20 majors and 3 ahead of Novak Djokovic, who was knocked out by Thiem in the semifinals.

But the world No. 2 hailed Thiem as a champion of the future.

“I am sorry as you are one of the best examples on tour,” said Nadal.

“You are a hard worker, always have a smile on your face and are a good person. That’s the most important thing.”

“Thanks for being a great inspiration for me and small kids around the world.”

“If I wanted to lose to someone it would be you because you deserve it. Well done and keep going – you will win this for sure.”

Thiem, bidding to become Austria’s second Grand Slam champion after Thomas Muster win in Paris in 1995, cut a weary figure towards the end of the three-hour final.

The 25-year-old was playing for a fourth successive day.

On Saturday, he  needed 5 sets to defeat Djokovic, ending the world No. 1’s 26-match winning run at the majors.

"I gave everything I had. I honestly love this tournament with all my heart."

“It’s very tough. I gave everything these last two weeks,” said Thiem, who had 7 fewer winners and 7 more unforced errors in the final.

“Rafa, well done. You are an amazing champion and a legend in our sport.

At least, Thiem could be consoled by seeing his girlfriend Kristina Mladenovic winning the women’s doubles title with Timea Babos earlier Sunday.

“12th RG title is absolutely unreal! Very proud to see Domi standing next to this legend of our sport! Your turn is coming soon,” tweeted the French player. – Rappler.com