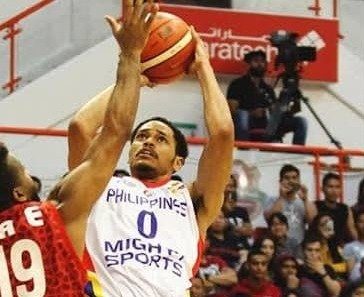 While the roster of the five-time champion remains a mystery for both Tiu and Serbian consultant Rajko Toroman, the Go For Gold-backed Mighty Sports is not taking any chances in its 3 pm showdown.

“We still don’t know which team Iran will be fielding, but I’m sure it’s not their elite team,” said Tiu, who also served as one of the deputies of Gilas Pilipinas Youth that competed in the recent FIBA Under-19 World Cup in Greece.

“Still, we have to play to the best that we can since we want to have a winning start,” said Tiu.

Even the godfathers of the team – Alex Wongchuking of Mighty Sports and Willy Ocier of Go For Gold – are both looking for a great start in their bid to regain the title the team won in its initial foray 3 years ago.

“We are representing our country so I told our players to give their level best each game. That’s one way of entertaining our kababayans out there,” said Wonghuking.

Also expected to deliver the goods for the team are Jason Gray and Roosevelt Adams, who helped Mighty Sports finish 3rd in the tough Dubai Invitational tournament last February.

Enjoying the advantage of having 7 imports in its previous stint, Mighty Sports posted a whopping average winning margin of 17.4 points in its eight-game sweep of the tournament that mirrored the 1981 feat of the Ron Jacobs-mentored Northern Consolidated.

After Iran, Mighty Sports faces powerhouse Jordan on Saturday, Japan on Sunday, Canada on Monday and Korea on Tuesday before taking a two-day break.

“It’s a tight first 5 days sked for us that’s why we need to have a good start,” said Tiu. – Rappler.com