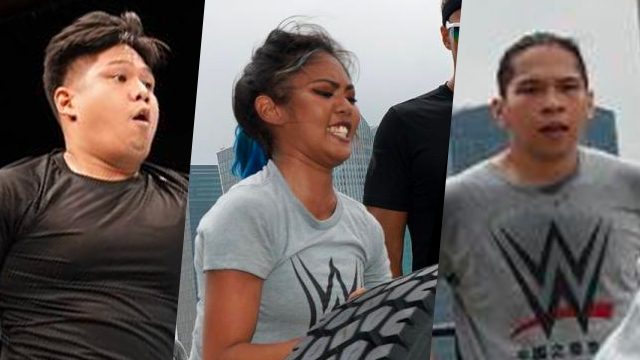 Facebook Twitter Copy URL
Copied
Crystal, Jake de Leon and Ken Warren are among the 40 wrestlers from Asia who tried their luck in WWE's search for its next wrestling superstars

MANILA, Philippines – Three homegrown Filipino wrestlers may be a few steps away from becoming the next superstars of World Wrestling Entertainment (WWE).

Crystal, Jake de Leon, and Ken Warren of Philippine Wrestling Revolution (PWR) were part of WWE’s talent tryout in Shanghai, China this week, the second one it held in that country since 2016.

The 3 were among the 30 men and 10 women wrestlers who tried their luck in the four-day talent camp, reported WWE.com on Tuesday, July 16. The other athletes came from mainland China, Hong Kong, Taiwan, Japan, Singapore, and Thailand.

In a video clip tweeted by WWE NXT, Crystal was elated about her experience, and praised her fellow trainees.

For @CrystalMNL, the first two days of the #WWEChina Tryout have been mind-blowing, but she’s excited to finish strong! #NXT pic.twitter.com/32IcDe78BJ

Calling herself the “Queen of Philippine Wrestling,” Crystal has competed around Southeast Asia and has challenged for a handful of women’s championships along the way. (READ: Trailblazers: The women of Philippine pro wrestling)

“The Senyorito” Jake de Leon and “The Social Media Sinister” Ken Warren have been part of PWR since its launch in 2014. They have gone on to win multiple championships and accolades, and have competed overseas, too.