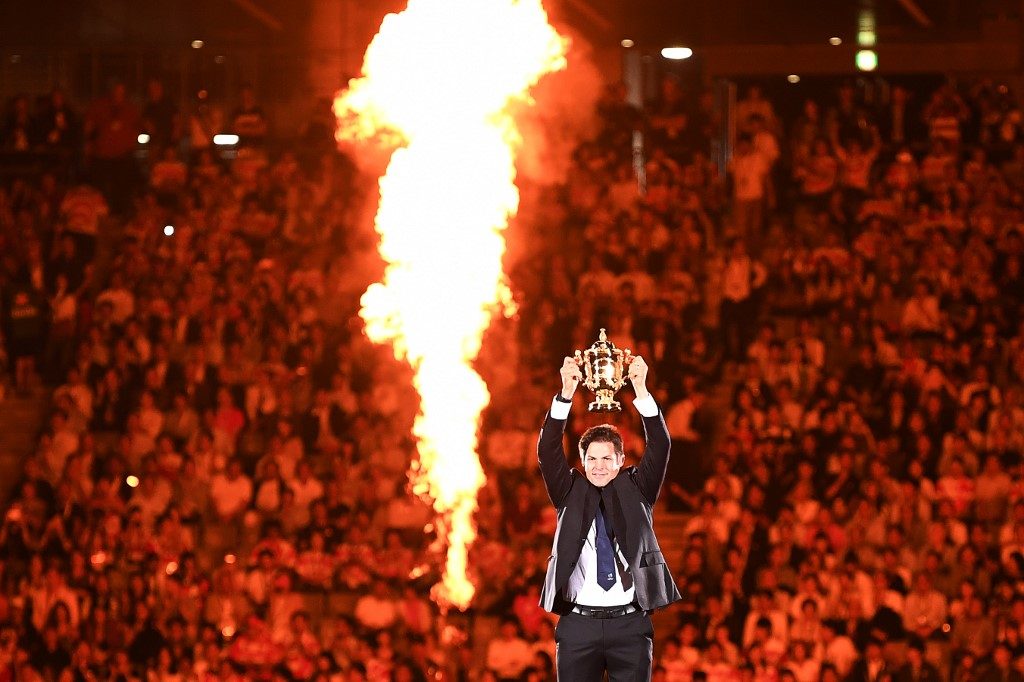 TOKYO, Japan – The first Rugby World Cup hosted in Asia opened Friday, September 20 in a packed Tokyo stadium, as the game seeks to tap into a new fanbase beyond its traditional heartlands in Europe and the southern hemisphere.

A sea of fans decked out in the red and white jerseys of the host team cheered on performers at the opening ceremony, a sound and light show fused with traditional Japanese cultural references and rugby history.

Children representing the 20 competing teams belted out the World Rugby anthem “World in Union” before former All Black skipper Richie McCaw brought in the glittering Webb Ellis Cup that New Zealand hope to win for an unprecedented third straight edition.

Prince Akishino officially declared the tournament open, with World Rugby chief Bill Beaumont saying: “This is the moment we’ve all been waiting for… We can all be very proud tonight. You have made history.”

The tournament promises to be one of the most open in history, with at least 5 or 6 teams seen capable of lifting the trophy in Yokohama on November 2.

Organizers hope stars of the game such as All Black Beauden Barrett, Ireland’s Johnny Sexton or South Africa’s Siya Kolisi will spark enthusiasm for the game in Japan and Asia more broadly.

The early signs are good, with officials saying the tournament should be close to a complete sell-out and a staggering 15,000 fans turning out on a public holiday just to watch Wales train.

The global rugby showpiece will also serve as a tasty amuse-bouche for Japan as it prepares to host the Tokyo 2020 Summer Olympics.

Officials claim that a promotional drive has inspired 1.8 million new rugby participants since 2016, one million of those in Japan.

But there are also reasons to believe the game in Japan is in need of support, with declining gates for club rugby matches and the country’s only Super Rugby franchise, the Tokyo-based Sunwolves, booted out of the competition for commercial and logistical reasons.

Much will depend on the success of the home team, which gets the tournament underway on Friday with what should be a routine win against Russia.

Japan served up the biggest shock in World Cup history in 2015 when they beat the mighty Springboks 34-32 in a match dubbed the “miracle of Brighton” that has even inspired a movie.

This time, however, no one is taking the Brave Blossoms lightly and they will do well to achieve their goal of reaching their first ever quarterfinal by getting out of a pool dominated by Ireland and Scotland.

The All Blacks remain the team to beat and their crunch encounter with South Africa on Saturday will go a long way to determining the outcome of Pool B – and maybe the next home of the Webb Ellis Cup.

Ireland come into the competition as the world’s No. 1 side, but they often flatter to deceive when it comes to the World Cup and have never ventured beyond the quarterfinals.

Much rests on the shoulders of fly-half Sexton, who at 34, is no longer in the first flush of youth and has suffered an alarming dip in form.

England, coached by Eddie Jones – who led Japan to that famous win over the Springboks – will also fancy their chances but they have been drawn in a tough Pool C alongside bitter Six Nations rivals France and the ever-dangerous Argentina.

Jones named a full-strength team for the opening match against Tonga, showing he is not taking the Pacific islanders lightly.

The other group sees Australia and Wales as the top teams and either one could trouble the business end of the competition.

But the gap between the traditional haves and have-nots of World Rugby has shrunk and more upsets are expected – with Fiji in particular considered a dangerous dark horse.

With the tournament held in natural disaster-prone Japan, organizers say they have put in a “meticulous” contingency plan against earthquakes and also typhoons, which are very much in season during the competition.

If a match cannot be played, it will count as a draw, resulting in the intriguing potential scoreline of New Zealand 0, Namibia 0.  – Rappler.com