MANILA, Philippines – In what has been a phenomenal week for Philippine gymnastics, Filipino teen Carlos Edriel Yulo put the spotlight on the country at the 2019 World Artistic Gymnastics Championships by qualifying for the 2020 Tokyo Olympics, reaching the top 10 of the men’s individuall all-around final and becoming the first Filipino world champion by ruling the men’s floor exercise.

Here are some facts on the country’s latest sporting sensation:

1. He is the first Southeast Asian male world champion

The 4-foot-9 dynamo secured the country’s first world championship after topping the men’s floor exercise final with a score of 15.300 in the 2019 World Artistic Gymnastics Championships on Saturday, October 12.

But the feat also made him the first Southeast Asian male gymnast to capture a gold in the Worlds, just a year after also becoming the first male in the region to win a world championship medal when he picked up a men’s floor exercise bronze in the 2018 edition in Doha, Qatar. 2. He has been training in Tokyo, Japan for 3 years

Yulo has been under the tutelage of Japanese coach Munehiro Kugimiya, who finally produced his first world champion in the teen gymnast. (READ: Tokyo training pays off for Olympic-bound gymnast Yulo)

The Filipino prodigy met Kugimiya when the latter was dispatched by the Japan Gymnastic Association to help coach the Philippine team in a gesture of sporting goodwill.

Kugimiya saw Yulo’s potential and believed his new ward – who grew up in Leveriza, Pasay City and used to enjoy watching the national gymnasts at the Rizal Memorial Sports Complex in Manila – needed to find better training conditions.

So at 16 years old, Yulo joined Kugimiya in Tokyo where the training, he said, was “super hard.” But the young Olympic hopeful – who idolizes Japan’s three-time Olympic gold medalist and 21-time world champion Kohei Uchimura – soldiered on.

Yulo, who’s now fluent in Japanese, didn’t drop his studies to pursue his Olympic dream. He’s also currently a college student at Teikyo University where Kugimiya – whom he calls coach Mune – works as an assistant professor. 3. He surprised the world in his senior debut

After an impressive run in the junior competitions, Yulo quickly made a splash in his senior debut last year as he landed on the podium in several international gymnastic events.

In 2018, Yulo proved to be a a consistent World Cup series podium finisher as he won medals in the Melbourne, Baku, Doha and Cottbus editions.

Expected to deliver a gold in the 2018 Asian Games, he disappointingly crashed to 7th place and missed the podium.

Yulo then opened his 2019 campaign with a World Cup gold medal in the men’s floor exercise in Melbourne, then followed it up with a bronze in Doha.

The 19-year-old then hit another career milestone when shared the top of the podium with seven-time Olympic medalist Kohei Uchimura in the All Japan Senior Championships last September.

It has been a long road for Yulo, who started making waves in the local scene at the Palarong Pambansa where he won gold for the National Capital Region (NCR) in the individual all-around event. (WATCH: A bubbly 12-year-old Carlos Yulo shares his medal hopes) 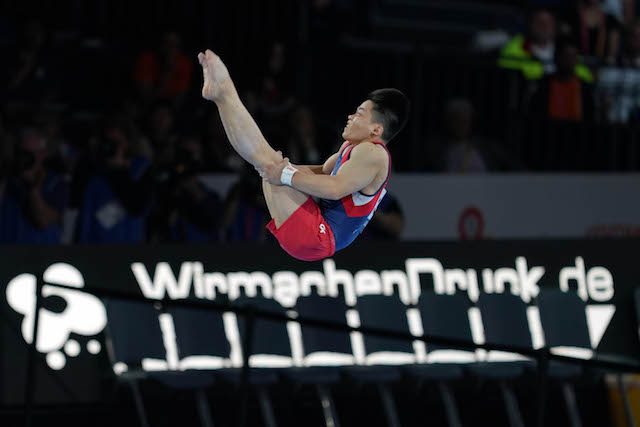 4. He is the second Filipino to qualify in the 2020 Tokyo Olympics

Delivering a gritty performance, Yulo finished 18th overall out of 160 entries to make the cut of 24 gymnasts in the men’s’ all-around finals at the 2019 World Artistic Gymnastics Championships on Monday, October 7 in Stuttgart, Germany.

Although he landed outside the top 12, Yulo still secured his maiden Olympic berth as the qualifying mark excluded countries which already qualified prior to the event. 5. He is set to compete in the 2019 Southeast Asian Games

As the Philippines hosts the 2019 Southeast Asian Games, Yulo gets to show his act in front of his countrymen late this year.

Yulo aims to sweep all 7 artistic events in the gymnastics tournament that will be held from December 1 to 9 at the Rizal Memorial Sports Complex in Manila.

With his recent impressive feat, he’s also one of the Philippines’ flag-bearer nominees for the regional biennial meet’s opening ceremonies set on November 30 at the Philippine Arena in Bocaue, Bulacan.