How Carlos Yulo tumbled to success Facebook Twitter Copy URL
Copied
Before basking in world gymnastics glory, Carlos Yulo shares how he came back from the brink of quitting

MANILA, Philippines – Training in Japan would have been a dream for many gymnasts hoping to make a mark in the sport.

So it’s no surprise that Filipino teen sensation Carlos Yulo – fueled by the hope of making it to the most prestigious sports competition in the world – immediately said yes when he got offered to move to Japan in 2016.

Living in a country that produces world champions and Olympic gold medalists in gymnastics, however, turned out to be tougher than expected, so much so that it pushed Yulo to the brink of quitting.

Then only 16, Yulo knew that training would be very difficult. But he didn’t think that living all alone in a foreign country would make it harder for him to commit to the sport.

(The hours felt very long, and then there’s that feeling that I’m all alone. It was a big gym and I was the only one there. It was just me and my coach. In the Philippines, I would train together with my teammates and it was fun training with others.)

Of course, had Yulo known that 3 years later his hard work and sacrifice would make him the country’s first world gymnastics champion, and at the same time, a qualifier in the 2020 Tokyo Olympics, those thoughts would never have crossed his mind.

(I’m so lucky. I’m glad that I didn’t quit because if I did quit gymnastics, I might just be a bum.)

In 2013, Yulo met his mentor Munehiro Kugimiya when the Japanese came to the Philippines to help train the national team.

(I was really happy to meet coach Mune. In 2012, we went to Japan for a one-week training camp, but instead we just watched competitions in Japan. I remember that I was so embarrassed that I wanted to go home because the level of competition was so high there. But when coach Mune came, I felt like this was my chance to reach the level of Japanese gymnasts.)

“Pure mind,” said Kugimiya. “This is very important for training. If he’s talking, he’s not listening, or something, it’s difficult. But he’s always thinking, he’s trying to beat himself and that’s the most important.”

By 2015, Kugimiya wanted the 4-foot-9 dynamo to compete in the junior world championships in Russia.

Although their young ward showed promise, Gymnastics Association of the Philippines (GAP) president Cynthia Carrion felt that Yulo might feel overwhelmed in the world stage.

But Kugimiya insisted the exposure would do Yulo good, so Carrion gave it a go.

“So we had to find the money [to send him to the world championships] and finally when he went, he came 3rd place. Russia was first, then China, then the Philippines because of Caloy, then I was [like], ‘wow… God.’”

For Kugimiya, the third-place finish in the junior world championships was already enough proof that the budding world star can make it to the 2020 Olympics.

“He had the potential to go to the Olympics that’s why I wanted to discover his talent more,” he said.

Kugimiya had always thought that Yulo should train in Japan. And when the time came for him to go back home to pursue his doctorate degree in Sports Management in Teikyo University in Tokyo, Carrion thought of a setup that just might work.

“So I said perfect! You go together and you train in Tokyo, that’s the only way,” said Carrion. “He (Kugimiya) was convincing me he (Yulo) cannot train here in the Philippines – so hot and with the atmosphere, we had to go to Tokyo.” 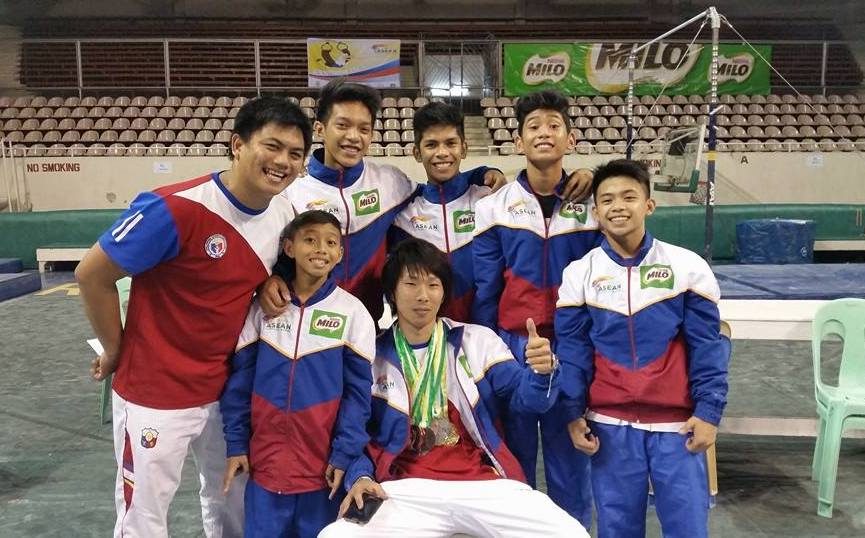 In Japan,  Yulo lived in the house of Kugimiya and his father in Yokohama for the first 6 months. Their daily schedule proved to be grueling as a one-way trip to Teikyo University at the northern border of Tokyo, where they’re both enrolled, takes two hours. The pair would attend their respective classes before meeting up again in the gym for a one-on-one training.

Things eventually eased up in 2017 when the duo moved to the university area. But just a few months before Yulo’s senior debut, the Filipino talent realized how he slowly wanted to give up as the training sessions got harder and he also started missing his family a lot.

(I was feeling down as the days went on, I missed my family and my trainings weren’t fun. They were so hard. In the last two years, I told my coach that I wanted to quit already because I just really felt sad. I felt that it wasn’t good to be training too much, I kept doing the same things, and I just wanted each day to end quickly.) By late 2017, Yulo recalled that he and his coach went to watch a competition and that’s where Kugimiya popped the question on whether the rising Filipino gymnast still wanted to pursue the sport.

Yulo immediately said he wanted to quit, but Kugimiya told him to talk to his parents first before making a final decision.

The then 17-year-old gymnast returned to the Philippines and spent time with his parents. But at that moment, he knew that there was a possibility he wouldn’t be going back to Japan again.

(After Christmas, I talked to them at the night of the 27th and that’s when I told them that I would stop gymnastics because I couldn’t take it anymore. But they told me the decision is up to me and they would support me. But they said that if you stop, what you’ve worked hard for would be put to waste. You started this journey already, why don’t you just finish it?) It was by chance that Yulo got into gymnastics.

Growing up in Malate, Manila, a 7-year-old Yulo and his cousins used to casually tumble in the playground across Manila Zoo. A neighbor, who was a gymnast, told Yulo’s grandfather, Rodrigo Frisco, that his grandchildren should go to the Rizal Memorial Sports Complex.

(The next day, we went there, but we weren’t let in at first because we were outsiders and we looked so filthy.)

Yulo and his cousins were given a chance to prove their talent when GAP secretary-general Daniel Lopez asked them to perform some stunts. Frisco initially vouched for Yulo’s older cousin, but he suddenly was too shy to perform.

Out of embarrassment, Frisco then encouraged Yulo – who said that he was the more timid one in the family – to impress Lopez in the tryouts.

Yulo did 3 straight tumbles and Lopez saw some potential, which prompted him to take Yulo for training.

(He was always a champion. He only finished 4th place once, then he just continued winning gold medals until he was in Grade 10. In Grade 10, that’s when he went to Japan.) After a year in Japan, though, Yulo returned to the Philippines unsure if he’d still want to commit to the sport.

Yulo needed a period of prayer and reflection before half-heartedly deciding to go back to Tokyo and wrap up his preparations for his senior debut.

In 2018, Yulo had an impressive start as he proved to be a consistent World Cup series podium finisher and won medals in the Melbourne, Baku, Doha and Cottbus  editions.

Despite garnering praise from gymnasts all over the world, it wasn’t enough to totally lift his spirits as he continued to struggle with his relationship with the sport.

(As I kept going, it wasn’t easy because there were lots of ups and downs, but at least I no longer felt too down. There were some days that were good and I would journal it. And when there were bad days, I would also write it down, so it was like writing a diary everyday.)

One of the lows in Yulo’s senior debut year was his Asiad performance where he failed to live up to medal expectations for the Philippines. There were high hopes when Yulo finished first in the eliminations, but he stumbled and fell to 7th place in the final.

However, his turnaround came during the 2018 Doha World Championships where he made history as the Philippines’ first podium finisher in the tournament with a bronze medal.

(I think he fully accepted his love for gymnastics when he won the bronze medal last year. When he came home for vacation, he told us during lunch after the mass in Quiapo: ‘Ma, where would I be now if you didn’t encourage me.’ So he finally accepted the fact that he brought honors to the country and he became the first Filipino gymnast to bring home a bronze medal from the world championships, where it’s even very difficult to qualify.)

With his renewed passion for the sport, Yulo then opened his 2019 campaign with a World Cup gold medal in the men’s floor exercise in Melbourne, then followed it up with a bronze in Doha.

The 19-year-old then hit another career milestone when he faced his idol, seven-time Olympic medalist and 21-time world champion Kohei Uchimura, and wound up sharing the top of the podium with him in the All Japan Senior Championships last September. But his biggest achievement yet came in October when Yulo captured the Philippines’ first world championship gold medal after topping the men’s floor exercise final with a score of 15.300 in the 2019 World Artistic Gymnastics Championships in Stuttgart, Germany.

The feat made him the first Southeast Asian male gymnast to capture a gold in the Worlds.

In the same tournament, Yulo also secured a berth in the 2020 Tokyo Olympics after reaching the qualifying mark in the men’s individual all-around final.

“Our target is the Olympics and it’s not changing. We’re in the process,” said Kugimiya.

While the pressure to excel remains, Yulo also wants to look more at ease, much like American champion Sam Mikulak.

(I want to be like Sam Mikulak of USA. He’s always smiling and he makes gymnastics seem so easy. I want to be that kind of gymnast. I don’t know how to be like him, but I will be my own version even if I’m not smiling because I always put on a serious face when I perform.)

But whatever game face Yulo puts on, in the end, the prized Filipino gymnast just wants to keep on winning. – Rappler.com