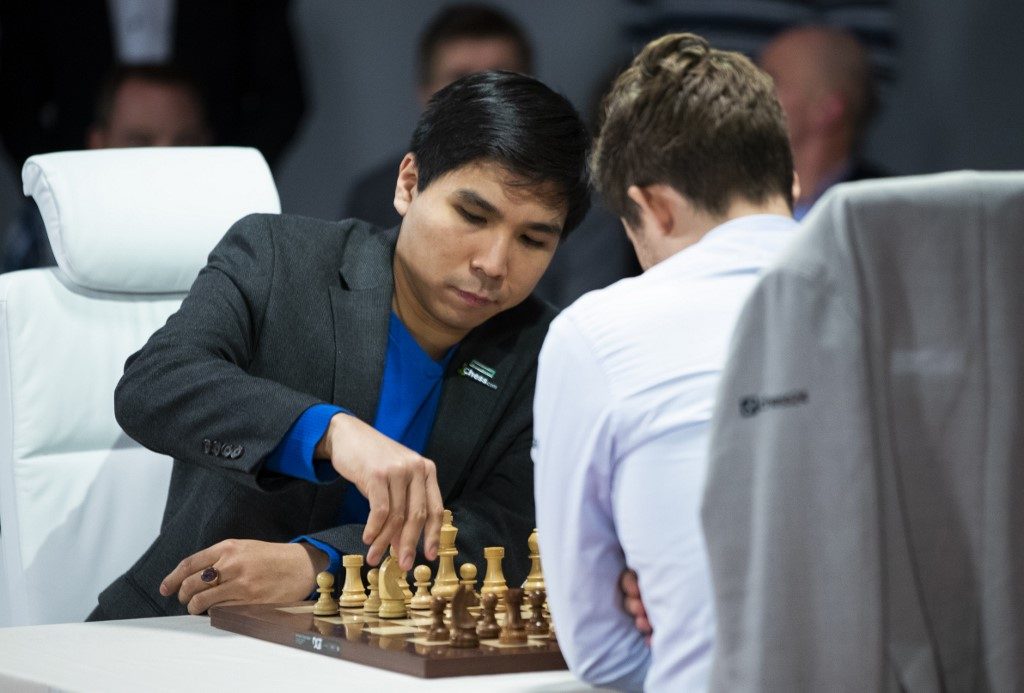 So, who represented the Philippines before leaving to play for the US in 2014, drew the first fast rapid game and won the second match in the final showdown of the three-day title series.

“This tournament is a surprise,” So, ranked No. 14 in the world, told chess.com/tv after the game. “It’s unexpected.”

Told by the panelists he would be called to receive a champion’s trophy, So laughed and said:  “I don’t know when I last received a trophy.”

The Cavite-born So, who trails Carlsen 1-5 in standard chess, drew the first game before winning the second on Day 1. (Wesley So shocks world No. 1 Carlsen, takes early finals lead)

So followed it up with two more wins the next day to build a seemingly insurmountable lead over Carlsen, who was playing before his countrymen. (READ: Wesley So nears Fischer Random world chess title)

Unlike standard chess, Fischer Random players face a tougher challenge as the starting position gets jumbled every game.

The randomized setup, invented by late world champion Bobby Fischer, forces players to think and not rely on computer engines to prepare.

Fischer himself unveiled the event in Argentina in 1996, but the format took long to take root. This year’s first world event was held under FIDE (International Chess Federation).

The matches consisted of slow rapid encounters with victories worth 3 points and fast rapid games worth 2 points.

Grandmaster Yasser Seirawan, one of the commentators, said Carlsen only got a good position in Game 1.

Norwegian journalist Tarjei J. Svensen, in his Twitter post, said So was happily signing autographs and posed for selfies at the packed art center.

Carlsen just gave a very brief comment to NRK: "I just want to congratulate Wesley So, he played a lot better than me." Then said he is "ashamed" about his own play. #frchess

So will be competing in the Grand Chess Tour next in Bucharest where world No. 2 Fabiano Caruana – who finished 4th in Fischer Random after bowing to sixth-ranked Ian Nepomniachtchi in the battle for bronze, 12.5-5.5 – will also compete. – Rappler.com