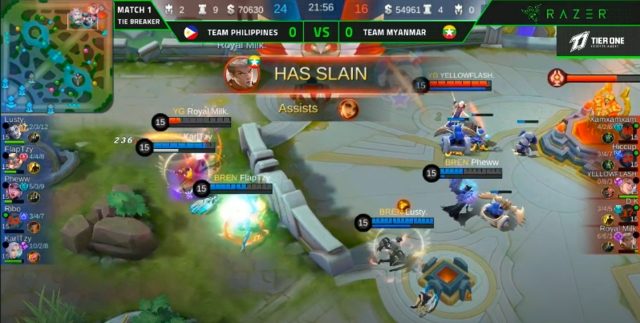 Bren Esports shook off a lethargic start against Yangon Galacticos of Myanmar in their knockout tiebreaker match to emerge at the top of Group B and set up an upper bracket finals date with Group A leader Vietnam.

The Philippines and Vietnam will face off in a best-of-three series on Friday, July 10, to determine which team will advance to the grand finals.

Yangon Galacticos, though, looked primed to get the win as it led 11-7 in kills and 4-1 in turrets in the first 10 minutes.

But the complexion of the game changed when KarlTzy managed to get the last hit on the Lord – paving the way for Bren Esports to put the pressure on Yangon Galacticos and push in the middle lane.

It did not help Yangon Galacticos that its carry YellowFlash – who used Lancelot – struggled to contribute as he finished with 0 kill, 3 assists, and 8 deaths.

After killing another Lord, Bren Esports smashed Yangon Galacticos’ middle inhibitor turret and wrapped up the win in 22 minutes.