Beckham to Filipino fans: Thank you for the welcome 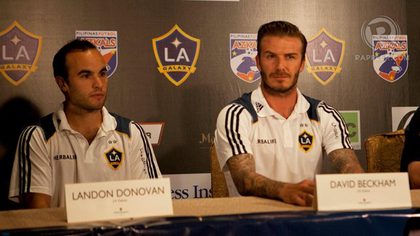 MANILA, Philippines — They have landed.

The LA Galaxy team arrived in Manila early this afternoon, to play the Philippine National Football Team, the Azkals, in a historic friendly match on Saturday, December 3. The friendly match is touted as “The Dream Cup” — appropriate, considering it is a dream come true for Filipino football fans of all ages.

But it seems that it is a dream come true for the LA Galaxy as well.

In a press conference at Shangri-La Makati where the team is staying, they told media that they are happy to be here and they are excited. David Beckham assures however, that at the end of the day, this is still a game and they will be competitive.

“We know every team we play against want to beat us,” says Beckham. “It’s a friendly match but we always go into games wanting to win.”

Beckham also expressed happiness about being int he Philippines in general, something reiterated by teammate Landon Donovan, who says they have a Filipina on their staff and have heard great things about the country.

“We just want to say how proud we are to be part of this tour,” says Beckham. “Thank you for the welcome and the kindness so far.”

In the country for the next three days are among the best football players in the world, most notably English superstar Beckham, Irish National Football Captain Robbie Keane, and Donovan, the top highest scoring American player in World Cup history. Beckham, Donovan and team coach Bruce Arena were present in the press conference to answer questions.

The Major League Champions just arrived from Indonesia, where they defeated the Indonesian National Selection 1-0 after Keane netted a blocked ball via a rebound. The Philippines is the team’s second stop of their Asia-Pacific Tour after Indonesia, and before Australia.

The Azkals will be led by Phil and James Younghusband, Chieffy Caligdong and Ian Araneta. Goal keepers Neil Etheridge and Roland Mueller will be unable to play as they are still committed to their European clubs, while team captain Aly Borromeo injured his knee and will be out as well.

According to Coach Michael Weiss, the Azkals are expected to play more defensively given the caliber of the LA Galaxy. He was accompanied by Phil Younghusband, Caligdong and Borromeo at the press conference.

Younghusband says they feel no pressure, but are excited to play the game more than anything. He also says the team will focus even if they are playing with their idols.

“In the game its different,” he says. “We’ll be focused on the game rather than be awed by who we are playing against.”

After the game though, he says it will be a different story.

Part of the LA Galaxy’s trip includes a football clinic for children aged 8-15 on Friday, December 2, from 1:30-3:30pm, followed by the team’s open practice. Children from Payatas, Bantay Bata, Unicef, Futkaleros and other football oriented charities will be participating in the clinic that will be hosted by the players, although tickets for other interested children are also for sale.

The match was officially confirmed at a press conference on October 27 with LA Galaxy President Tom Payne, PFF President Nonong Araneta, Team Manager Dan Palami and promoter Jinx Macabenta, although the date since Bright’s original tweet has since changed to December 3rd at Rizal Stadium. The PFF paid P1-M for stadium use after the Philippine Sports Commission charged the federation for rental use, given the Galaxy-related events are “commercial ventures.” The money will be used for football development projects.