Kobe shares with Filipinos his secrets to success 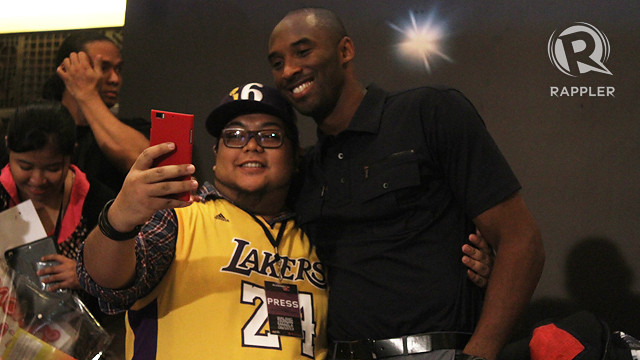 MANILA, Philippines — Typhoon Labuyo may have whipped the country with heavy rains but it failed to stop 5-time NBA champion Kobe Bryant from coming back to Manila to inspire his Filipino fans.

“Go after it. Whatever you dream, go after it,” said Bryant, who visited the country for the 6th time on Monday, August 12.

Coming straight from China, the Los Angeles Lakers guard did not mind the delay in his flight and the bad weather that followed him as he approached his press conference with a smile on his face — just like how Filipinos has always remembered him.

Staying on top not easy

According to the 2-time Olympic gold medallist, staying on top of your game is never easy unless you put a lot of work into it.

“When I was a kid resting after a workout, I’d say, here must be a kid in Iowa working out. So I got up  worked more,”  Bryant recalled his experiences as a child fueled his passion and determination for basketball.

Bryant has proven to be one of the best players in the history of the game. Despite this, however, he believes that difficulties are inevitably encountered along the way.

“Embrace the challenges. Stop sitting on your butt,” advised the Los Angeles Lakers star on how to face adversities.

Not just about basketball

He has also been vocal about the importance of imparting his skills and talents to the next generation. He even shared his plans on not playing in the FIBA World Cup next year to give more opportunities to the younger players.

“If you don’t inspire the next generation, then what do you really have? It’s not just about basketball.”

The way his fans and the whole world see it, the superstar may look very determined in working towards achieving his goals in basketball and in life, but Kobe showed that he is also just like every human being.

“I love to swim, I love to watch movies, ” he shared the other things he does aside from basketball.

“I’d love to try skydiving but I’ll hold off on that until I retire!” Bryant said with bursting laughter.

Allow people to see what’s inside you

Moreover, Bryant shared how much he enjoys social media.

The former league MVP joined Twitter on January 4, 2013 and has since amassed more than 3.2 million followers on the micro-blogging site. He also has the best Facebook presence among NBA players, with 16.5 million “likes” on his page.

With all the awards he’s collected throughout his storied career, Bryant has definitely left a huge mark on the sport. More than the accolades, though, he wants to be remembered for being able to make use of what he had.