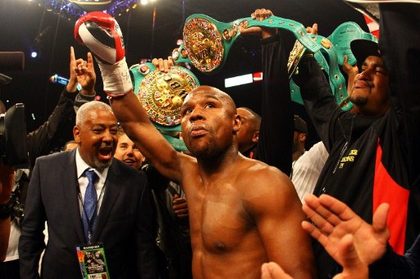 Mayweather, who stepped up in weight to fight Cotto, used his superior hand speed and solid defence to win the fight on all 3 judges’ scorecards after 12 rounds, in what will go down as one of his toughest fights.

“You got to suck it up and fight hard,” Mayweather said. “Miguel Cotto was a tough competitor. I had to execute the game plan and fight my heart out.”

Cotto, of Puerto Rico, made Mayweather work for the victory as he clearly won some of the middle rounds and showed a willingness to engage Mayweather in the centre of the ring and on the ropes.

“Miguel Cotto is a future hall of famer,” Mayweather said. “He is no push over.”

Mayweather ultimately survived one of the toughest fights of his career to extend his winning streak to 43-0 with 26 knockouts.

The fighters exchanged vicious punches in the 12th round with Mayweather landing the better of the shots. He appeared to wobble Cotto twice but couldn’t knock him down.

It marked the 20th career title fight for Mayweather and the first time he has fought at 154 pounds since beating Oscar De La Hoya in 2007.

Mayweather was coming off a controversial win over Victor Ortiz to take the World Boxing Council welterweight title in September.

Saturday’s fight was a spirited affair with plenty of combinations by both fighters and a quick pace because there was very little clutching and grabbing.

Cotto (37-3, 30 KOs) took some head and body shots from Mayweather early in the fight before putting together solid back-to-back rounds in the middle of the bout.

He bloodied Mayweather’s nose with a hard shot in the early rounds and it continued to bleed throughout the fight but didn’t pose a major problem for the challenger.

One of the best rounds of the fight was the 12th, where the fighters met in the centre of the ring as the MGM crowd stood and cheered.

Mayweather got the nod from all 3 judges, landing a total of 128 punches to 76 for Cotto.

Nonetheless, Cotto has a guaranteed purse of $8 million for this fight, while Mayweather’s purse is $32 million, a record high.

“You’re a hell of a champion…You’re the toughest guy I ever fought,” Mayweather told Cotto in the ring afterward.

In the meantime, Filipino boxing icon and politician Manuel Pacquiao arrived in Los Angeles Saturday to start his training camp for the bout vs WBO junior welterweight champion Timothy Bradley (28-0, 12 KOs), also at the MGM Grand Garden Arena in Nevada.

Pacquiao is about to begin a 4-week US training camp at the Wild Card Gym in Hollywood. He will be defending his World Boxing Organization (WBO) welterweight championship crown on June 9.

Fans have been waiting for a bout between Mayweather and Pacquiao.

Mayweather, 35, said he hasn’t given up on trying to work out a deal on a mega fight with Pacquiao. Their previous talks have been scuttled by a number of issues, including the sharing of pay-per view revenue and drug testing.

“The fight I was looking to fight was against Manny Pacquiao,” Mayweather said. “I don’t think the fight would happen because of (Pacquiao’s promoter) Bob Arum.

“Let’s give the fans what they want to see.”

The fight comes just weeks before Mayweather is scheduled to report to jail on misdemeanor domestic violence and harassment charges.

Asked about going to jail, Mayweather said he was ready to face the American prison system.

“You are faced with certain obstacles in life,” he said. “You take the good with the good and the bad with the bad. When June 1 comes around I am going to accept it like a true man.” – Rappler.com, with Agence France-Presse