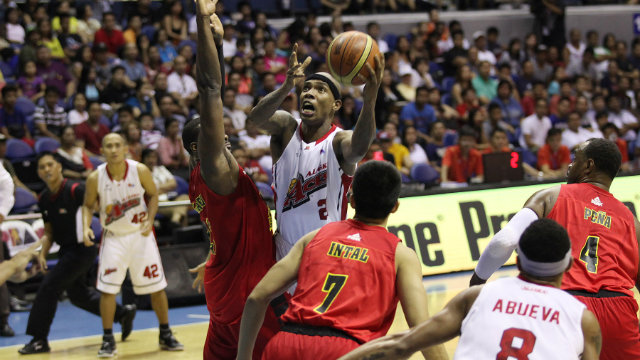 The Alaska Aces, led by two of their most aggressive players Calvin Abueva and Gabby Espinas, shrugged off the Barako Bull Energy Cola, 78-71, on Wednesday, April 2 in the PLDT Home TVolution PBA Commissioner’s Cup at the Smart Araneta Coliseum.

Barako, a dangerous team when allowed to stay close towards the end, managed to cling tight to the Aces for 3 quarters and was only down 53-50 heading into the fourth, after leading 30-26 at halftime.

But the aggressiveness of the 2013 Rookie of the Year Abueva at the turn of the payoff period resulted in nothing but good things as Alaska pulled away somewhat, 55-52.

Playmaker JVee Casio padded on that to swing the momentum permanently on their side with another strong drive to the hoop for a 57-52 spread.

Shortly after, Abueva hit it home once again to make it an 8-point 60-52 edge.

“Just nice of Calvin to come out,” Trillo said of Abueva, who tallied 9 points on 4-of-6 field goals together with 9 rebounds. “He’s been struggling of late but he brought his energy.”

Meanwhile, Alaska found another bright spot in Espinas who was equally aggressive both on offense and defense. The 6-foot-4 forward wrested control of the game in the final frame and hit timely baskets to keep the Energy at bay despite their gallant effort.

He and Abueva conspired for 4 points near the last two minutes of the game to make it a 70-63 affair.

“Gabby not only contributed to his points,” Trillo said. “Dollard averages about 34 a game. I thought we did a decent job there with Dollard tied down until the end.”

Espinas pestered Barako import Josh Dollard all night long and made him shoot a measly 6-of-16 from the field, resulting in just 26 points along with 16 rebounds.

Espinas tied Dollard down and never let him loose while scoring 14 points to his name and grabbing 3 rebounds.

Barako inched closer towards the end via the free throw line but got sent back by a Casio pull-up jumper with 52.4 on the clock, 67-72.

The Aces were truly relentless on defense as they also forced 18 turnovers on Barako and got 17 points off of that. They limited their miscues to 8.

With the win, the Aces break away somewhat from the log jam in the middle of the standings with a 4-3 slate at 4th place and their third straight win at that.

“This was very, very important for us. It was a moment-of-truth game, I thought. Because if we lose we’re just back to win and lose,” Trillo said.

Trillo also says he’s satisfied with where his team is headed.

“This is where we want to be. This is more of our game. It’s not run and gun,” he explained. “It’s ugly, physical, halfcourt defensive type of games.”

The road doesn’t get any easier for Alaska, however, as they face Barangay Ginebra and San Mig Coffee next.