Apr 3, 2014 6:28 PM PHT
Levi Verora
Facebook Twitter Copy URL
Copied
They don’t have star players who can elevate their competitiveness to the next level. No sponsors. No home court. But they practice 3 times a week 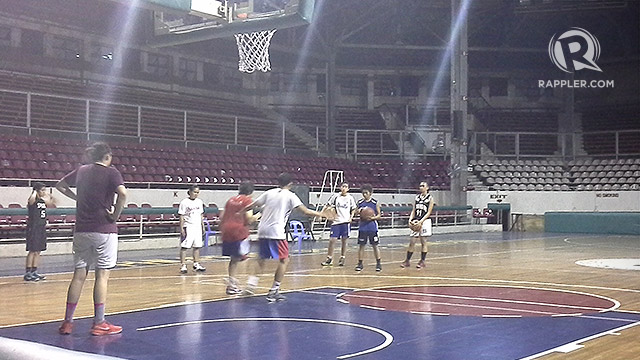 Only 7 players were present in that Perlas Pilipinas practice, although Ong knew they had done enough. Mainstays Melissa Jacob – who did not even suit up for practice as she had a backache – and Joan Grajales led the pack. There were also new faces in sight, like Adamson’s Zhalyn Mateo who plays the wing position and a 6-foot-2 prospect named Alicia Mendez out of Enderun Colleges.

As I sat down with Coach Ong after their 5-8 pm shift, she showed me a piece of paper containing their schedule.

She immediately cracked a joke. “Iskwater kami eh. ito nga schedule namin: mayroon sa Makati Coliseum, meron sa Ronac Gym dahil friend ko ‘yung isang tagaroon,” Ong said with a few chuckles. (We’re like squatters. Here is our schedule: we have practices at Makati Coliseum and the Ronac Gym since I have a friend from there.)

The Perlas Pilipinas team is forced to look for another venue, since the men’s and women’s volleyball squads – both backed by PLDT Home TVolution – are training inside the Rizal Memorial Coliseum for their Asian Club Championships this April.

Luckily for Perlas, Ong has the Ronac Gym, where some PBA teams practice, and the Makati Coliseum, which was once home to the PBA.

The squad played their hearts out even if there were just 6 of them. They ran plays that are very basic and suit international competition. Ong asked her team to do some pick and rolls, backdoor plays, drive and kick plays, and emphasized on motion.

Later on I learned from Coach Ong that the women’s hoop team has no allowance at all, yet they all continue training 3 times a week for the love of the sport.

They’re no Smart Gilas. They don’t have a Jim Saret, a Rajko Toroman, nor a Chip Engelland who can elevate their competitiveness to the next level. The women are stuck at No. 58 in the FIBA rankings while the men enjoy being at No. 34 – the 5th-highest ranked Asian squad in the world.

Ong was working hard, thinking of spontaneous plays to run in practice. Her hands-on assistant is Joan Grajales, who has served the national team for several years.

Ong told me the women’s hoops team will have no major tournaments again this year.

Perlas does not have the post-practice atmosphere that the women’s volleyball team that trained before them had: all were wearing shirts given by their major sponsors; after their session, the spikers huddled up at the sidelines for a group dinner as their handlers distributed their packed meals.

Perlas Pilipinas meanwhile, after a battlecry at centercourt, packed their things and quietly left the venue. And yet both of them play for the Red, White, and Blue.

With most of Ong’s players still in college, she has to wait for them to be released by their mother ballclubs. Since there is a year-long schedule of collegiate leagues (UAAP, NCAA, Fr. Martin’s Cup, Filoil Cup, to name a few), Ong’s wish of having plenty of dribblers in practice will have to wait.

She added after those players graduate from their respective schools, they will only have a few years left to train for the Philippines – a stark contrast to what other countries do. Ong mentioned about the other nations that have long-term programs, such as having U-16, and U-18 national teams.

In fact, Ong hopes the South East Asian Basketball Association (SEABA) championship, which is tentatively set this May in Indonesia, be moved to the last quarter of the year for them to be complete.

A good start is what women’s basketball needs in the country in order to succeed, said Ong.

“Ang PBA, may D-League, may Young Stars. ‘Yung para sa babae na lang ang wala.” (The PBA has a D-League and lately the Young Stars. But a league for girls is missing.)

She said the women’s tournament need not be big; as long as we take the right steps, then there soon might be a home for women’s hoops in the country.

“Tiyaga-tiyaga lang. Hindi naman kailangan malaking liga agad eh. Maski D-League lang tapos magtuloy-tuloy,” she told me. (We just need to be patient. We don’t need a big league to start with. Even a small D-League will do good.)

The crew left the gym and shall prepare for another practice session the morning after, which shall concentrate on weight training and shooting. They are all hoping that, someday, women’s basketball will finally take off here in the Philippines. – Rappler.com