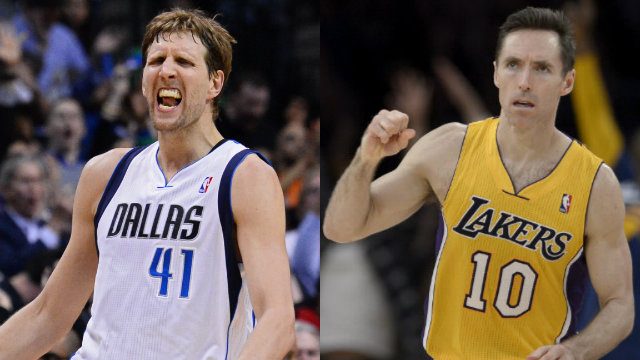 LOS ANGELES, USA – A pair of former Dallas Maverick teammates – Dirk Nowitzki and Steve Nash – made NBA history on the same night by achieving a couple of milestones.

Nowitzki finished with 21 points to move past Oscar Robertson in the NBA’s all-time scoring list as the Mavericks won over Utah, 95-83

(Editor’s note: AFP earlier noted the following points for Nowitzki: 27,714. We apologize for the error.)

“One of the few times I’ve truly been in awe of an accomplishment,” Nowitzki said. “Top 10 all-time scorers is an unbelievable accomplishment because it’s a level of excellence that’s beyond belief.”

Nash set the mark with two minutes left in the second quarter of the Lakers’ game against the Houston Rockets.

Jackson, who is now coach of the Golden State Warriors, congratulated Nash via Twitter.

Congrats to the Great @SteveNash on passing me on the All Time Assist list! I'm Honored!! God Bless #4