Apr 16, 2014 6:12 AM PHT
Expo Mejia
Facebook Twitter Copy URL
Copied
The Philippine Volcanoes are on course for the 2014 Asian Games. Why will they medal this year? Expo Meija gives five reasons 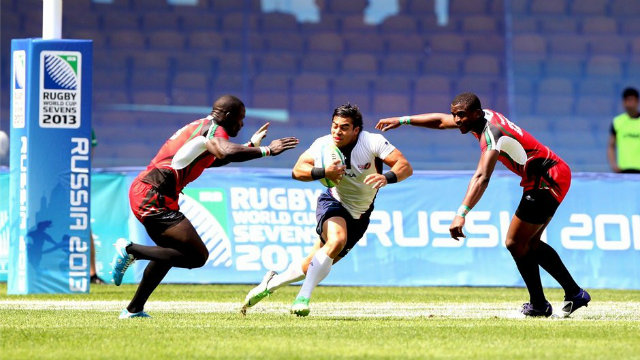 Last week, I discussed 3 ways in which the Volcanoes could look to improve their Rugby 7s program. Greater consistency, improved fitness and resolving some player and management issues were the keys to success.

I also said that the Volcanoes would be unlikely to medal at the Asian Games based on their 2013 results. But this is a new year with a new focus. The Games are months away and I’m confident the Volcanoes will come good.

In general, team sports have given paltry returns at the Asian Games. In fact, apart from Basketball, the only other medal was the bronze won by the Men’s Volleyball team in 1962.

I am also certain the Volcanoes will medal at the Asian Games and will become the first team to achieve that feat in over 50 years (aside from Basketball).

Here are 5 reasons the Volcanoes will do us proud at the Asian Games in Seoul later this year.

The Volcanoes have proven time and again they are big game performers. When it comes down to the wire, the must-win game, the Volcanoes never disappoint. Examples – the 2012 game versus Sri Lanka to gain promotion to the Top League, the game versus Korea to qualify for the Rugby 7s World Cup, the 2013 game versus UAE to stay in the Top League.

The Volcanoes finished 5th in the last Asian 7s Series. Although disappointing, it’s not overly surprising. Traditionally the Volcanoes do not fare well in the longer series due to player availability. However for a one off tournament, the scenario changes.

In 2012, the Volcanoes finished the Asian Series in 7th place yet a month later finished 3rd in the one off tournament to qualify for the World Cup.

The Volcanoes’ team culture is built on 3 pillars; respect, discipline and being proudly Pinoy. This ethos has certainly lifted them in moments of adversity. The question will be whether they can reproduce that form without a major tournament as warm up. The answer is yes; the Volcanoes are big game performers.

The Volcanoes will build their campaign on 3 key players: Gaz Holgate, Matt Saunders and Andrew Wolff. They are world-class veterans with the ability to break open the game in an instant.

Gaz Holgate was the first Filipino player to earn a professional contract in Japan. Elusive, powerful and possessing great vision, Holgate will create plenty of opportunities for the others to post points.

The Volcanoes will also rely on Matt Saunders to make the line breaks. If Holgate is style, then Saunders is brute strength. Both are just as effective and both necessary. Saunders is contracted with the NTT club in Japan where he performed consistently well last season.

Then there’s the machine, Andrew Wolff. Unlike the others, Wolff decided against a professional contract in Japan in order to look after his growing business and other interests in Manila.

Early on in my time as Head of Performance at the Volcanoes, I was faced with a decision to include Wolff or another player for the Hong Kong 7s tournament. With little knowledge and no video footage of either one, I recommended the other player. I reasoned Wolff, playing only intermittently in Manila, would not be as fit as the other playing regularly in New Zealand.

After watching Wolff in the entire 2012 Asian Series I realized I couldn’t have got it more wrong. Wolff possesses explosive power and is at times unstoppable. He is the most consistent player ever to represent the Volcanoes at 7s. Wolff is a freak of nature not by talent alone but by virtue of his work ethic. He oscillates between business and sport yet reaches the power and fitness of a full time athlete.

3. Player Depth In the Squad

When the Volcanoes field their best team, they are capable of beating anyone in Asia. Whilst they may rely on some key players, the depth of their line-up will be crucial for success. Add Patrice Olivier, Justin Coveney, Chris Hitch and James Price to the mix and you have a team capable of a possible Gold at the Asian Games and a definite Gold at the Southeast Asian Games in 2015.

The list goes on. Veterans such as the Letts brothers Michael and Jake, the Saunders brothers Oli and Ben, the Matthews brothers Joe and Luke, will all be in the mix. Speedsters Ken Stern and Harry Morris can provide much needed pace out wide. Recently uncovered new talents such as Sean Lynch, Alex Aronson, Tim Bweheni and Ryan Clarke could provide the x-factor needed to win tight games.

Competition for places will be incredibly tough. That’s great news for the Volcanoes and their fans. The final 12 players named by the selection panel will be motivated and skilled enough to medal at the Asian Games.

Since Coach Al Caravelli joined the team in 2012, the Volcanoes have been refining their game plan. Caravelli is a dual international having represented both Argentina and USA as a player. He is a well-respected coach on the international circuit for guiding USA to some memorable victories at the HSBC World Series. His vast experience over hundreds of games at the top level has made him a shrewd tactician.

During Caravelli’s absences, Coach Matt Cullen has kept the same game plan and training regime albeit with differing styles. As stated last week, playing under two different coaches brings with it inherent difficulties but both seem to be heading in the right direction. Caravelli’s presence at the Asian Games will be crucial in plotting the tactical downfall of more fancied opposition.

Rugby is the ultimate team sport and cohesion is vital for success. However, this variation of the game is the one that not only accommodates but necessitates individual flare. With fewer players on the field in a Rugby 7s game, those naturally gifted players tend to dominate proceedings.

The Volcanoes have learnt their trade in the toughest leagues around the world. Their rugby pedigree is superior to those of other teams who play only in their local leagues. This will provide a distinct advantage over countries such as Sri Lanka, Malaysia, Thailand and South Korea.

So there you have the 5 reasons the Volcanoes will medal at Asiad.  It will not be an easy year with limited sponsorship coming in. The Volcanoes will be asked to dig deep into their own pockets once again. They will train in sub-standard conditions once again. But this only unites them and sharpens their focus.

A medal at the Asian Games will be a much-needed boost for the sport in this country. It will be the stepping-stone to the ultimate goal of a place on the World Series and for sustainable development in the local community. – Rappler.com