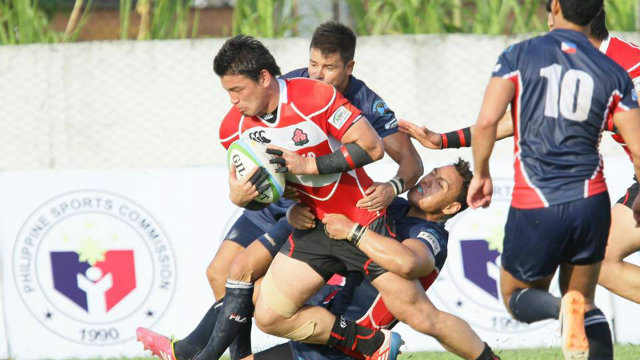 The Philippine Volcanoes resume battle at the Asian 5 Nations (A5N) when they take on Sri Lanka in Colombo this weekend. It promises to be a fiery encounter with both teams keen to avoid finishing in last place.

Over the past two years, an intense rivalry has developed due to the closeness of recent contests. The Sri Lankans will be keen to avenge their A5N loss in Manila two years ago. The Volcanoes want to eradicate the pain endured in the Asian 7s Series at the hands of the Sri Lankans.

The two teams respect each other but are a long way from being off-field buddies. There is always tension in both camps at the thought of another battle looming.

At the midpoint of Asia’s premier rugby tournament, it would seem the Volcanoes have little to play for. Two heavy defeats, at the hands of Hong Kong and Japan, have buried any chance they had of qualifying for the 2015 Rugby World Cup (RWC).

Having achieved the feat last year of playing at the Rugby 7s World Cup, it was certainly a dream for the Volcanoes to do the same in the 15s form of the game. But it proved to be a much tougher assignment and it will be four years before they get another shot.

So with Japan and Hong Kong guaranteeing their passage to the next stage of RWC qualification, there are only two questions remaining at the A5N. The first is, which team will gain direct qualification to the RWC? That seems a no brainer, with Japan having never lost in the history of A5N. Hong Kong will presumably go to the inter-continental play off against Uruguay.

The other question is, which team out of Sri Lanka, Korea or the Philippines will finish third and hence remain in the elite division?

A restructuring of the competition for next year means that only the top three teams from this year will play each other on a home and away basis in 2015.

If Sri Lanka beats the Philippines then the Volcanoes will need to defeat Korea the following weekend (presuming Korea loses against Japan on Saturday). In this scenario all three teams will finish with one victory and the Koreans favored to go through on points differential.

However, a Volcanoes victory over Sri Lanka will set up an amazing battle in the last round against Korea. It would be a winner takes all encounter in Manila on July 25, a one off match to remain in the elite division. And this is when the Volcanoes are at their best, with their backs to the wall, playing in front of their passionate fans.

So there’s everything to play for. Victory over their bitter rivals Sri Lanka to avoid the wooden spoon. Victory over Korea, the 26th best rugby nation, to remain in the elite division. Victory over both teams to ensure our highest finish ever in A5N history.

Undoubtedly it has been a rough few weeks for the Volcanoes. They were blown away 108-0 by a Hong Kong team that was highly motivated, well conditioned and battle hardened. The Volcanoes had only come together the week before and despite the great efforts of coach Jarred Hodges, it was almost “mission impossible”.

Seven days later and the improvements were obvious. Japan captain, Michael Leitch (a New Zealander who moved to Japan at 15 years of age), made it public before the game that they wanted to beat the Philippines by more than what Hong Kong managed.

The Japanese got a rude shock. The game was played on a hot afternoon, in a small subdivision, without stadium facilities and in front of loyal fans. A far cry from the magnificent venues the Brave Blossoms are accustomed to.

The Volcanoes lost the game but gained a moral victory. They stopped the invincible Japan from achieving their goal and they actually managed to lead in the game after scoring a great try early on.

Two weeks further down the track and the question is how much further have the Volcanoes improved? Having enjoyed a week off due to the bye round, followed by more intense training under stifling conditions, coach Stuart Woodhouse will no doubt have the boys in top shape.

If Hong Kong thought playing Sri Lanka in Colombo was a potential banana skin for them, then even more so for the Volcanoes. They will have to be at their ultimate best to overcome the opposition, their hostile fans and the sweltering conditions.

The return of key players could not come at a better time. Former captain, Michael Letts, will start at fullback. Hard hitting forwards Chris Hitch and Phil Abraham will add plenty of firepower up front. Veterans Ronald Fong and Michael Duhig provide much needed experience to the contest as will Harry Morris coming off the bench.

And here lies one more reason the Volcanoes are keen to play well. The stalwart of Philippines Rugby over the last decade, Michael Letts, has announced his retirement and victory seems the only appropriate send off.

Having started with the Volcanoes in the lowly divisions of Asian rugby, Letts has skippered the team to reach the pinnacle. He was one of the first to play professionally in Japan with the Toyota Shokki team and later with Kamaishi Seawaves. He is the ultimate gentleman who plays tougher than anyone else. He is everyone’s best friend on the team, an inspirational leader and a total quality player. You don’t find much better anywhere in the world.

“The boys are confident and looking forward to the challenge”, said Letts on the way to the airport. He will never admit it but that confidence stems largely from his ability to lead the team from the back of the field. It will be an emotional few weeks for Letts and the entire team.

Captain Oliver Saunders says they are only taking one game at a time. He added “the squad is looking good after a sharp week at training and coach Stu Woodhouse and the entire squad have devised a game plan, which if we execute well, will give us a great chance for victory over Sri Lanka.”

Head Coach Stu Woodhouse, coming in for Jarred Hodges for the second half of A5N, elaborated further saying “we worked hard on our defensive systems and our attacking patterns.” Sri Lanka will no doubt target the Volcanoes perceived weaknesses in the scrum and lineout but Woodhouse has ensured the Volcanoes will be solid in both departments.

There has been a lot of talk around town that Philippines Rugby is focusing only on a medal at the Asian Games for Rugby 7s. The A5N seems to have taken a back seat and win or lose, it doesn’t really matter, as relegation seems a formality. The lower division would be “a better fit” for the Volcanoes.

Try selling that to Michael Letts or to any of the squad training under the searing Manila heat to the point of physical exhaustion. You can bet the Volcanoes will put in a performance that every Filipino will be proud of.

A victory in Colombo this Saturday will make for a mouth-watering clash against Korea the following weekend in Manila. The Volcanoes certainly have everything to play for.

The Volcanoes team for the game versus Sri Lanka:

The game will not be televised on the Asian 5 Nations rugby channel.