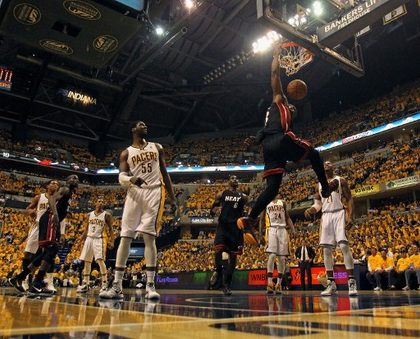 After falling behind 2-1 in the-best-of-seven second-round series, the star-studded Heat won three straight games to advance to the conference finals.

They next face either Boston or Philadelphia for chance to return to the NBA championship series.

Boston and Philadelphia are deadlocked 3-3 and will play a decisive game seven on Saturday, May 26.

Miami beat Chicago in last year’s Eastern Conference finals but fell to Dallas in six games in the championship series.

The Heat trailed by 11 early, but Wade scored 26 points in the first half — 20 in the second quarter — to keep Miami close.

Only a 10-0 scoring run late in the second quarter allowed the Pacers to take a slim 53-51 lead into the second half.

The Heat, who got 15 points from point guard Mario Chalmers and 12 from reserve forward Mike Miller, made do without power forward Udonis Haslem, who was suspended for the contest after his flagrant foul on Pacers forward Tyler Hansbrough in game five.

The Heat were also without backup center Dexter Pittman, who was suspended for three games for an elbow to Pacers reserve guard Lance Stephenson late in game five.

The Heat were already without their best big man, injured Chris Bosh.

“It was a competitive, hotly-contested series and that’s what it should be remembered for,” said Heat coach Erik Spoelstra. “There were a lot of ups and downs, but the guys were able to tough it out.”

Thursday’s game was tightly contested most of the way.

The Heat finally seized control in the third quarter, out-scoring the Pacers 28-16 to take a 10-point lead into the final period. Miller and Chalmers hit back-to-back three-pointers to end the third.

“We would have had to play our best to beat them, and we didn’t play our best,” said Pacers coach Frank Vogel.

All five Indiana starters scored in double digits, led by David West with 24 points. But the Pacers also had 22 turnovers leading to 26 Miami points.

Wade added a team-high 10 rebounds and James led the Heat with seven assists.

“Wade and James going like they were going tonight, they’re going to be tough to beat by anybody,” Vogel said. – Rappler.com