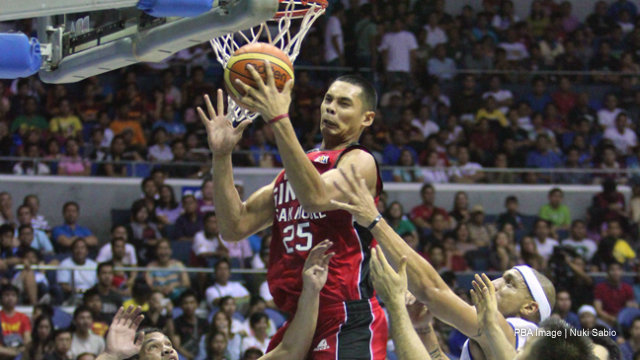 MANILA, Philippines – Gilas Pilipinas big man Japeth Aguilar is the leading candidate to be the country’s flag bearer during the parade of athletes in the 17th Asian Games set from September 19 to October 4 in Incheon, South Korea.

Gilas is currently seeing action in the 5th FIBA Asia Cup in Wuhan, China in the team’s last tournament before the World Cup.

Philippine Sports Commission (PSC) Chairman Ricardo Garcia, who is also the country’s Chef de Mission to the quadrennial games, said the Philippine Olympic Committee-PSC Asian Games Task Force prefers the flag bearer to be a popular athlete who can rally the entire nation to cheer and support the entire Philippine delegation.

Garcia said they are thinking of appointing a basketball player since it is a sport closer to the Filipinos.

“We want someone who is popular to the masses. One who is easily recognizable by the common Pinoy. Kapag nakita siya na hawak ang bandila natin, magiging proud at talagang ipagmamalaki ang mga atleta natin,” Garcia said.

(If people see that it’s him holding the Philippine flag, people will see that they can really be proud of our athletes.)

Garcia added his personal choice is Aguilar, one of the popular members of Gilas that clinched a berth in this year’s International Basketball Federation (FIBA) World Cup in Spain set from August 30 to September 19.

(He’s tall so people will easily spot him.)

The 6-foot-9 Aguilar, 27, of Pampanga, Philippines has been one of the most popular players in the PBA since joining the league in 2009, averaging 9.75 points in 114 career games, according to pba-online.net.

The Philippine will be competing in 25 of the 36 sports in Incheon where the country’s rowers and gymnasts will plunge into action ahead of the September 19 opening  ceremonies. – Rappler.com