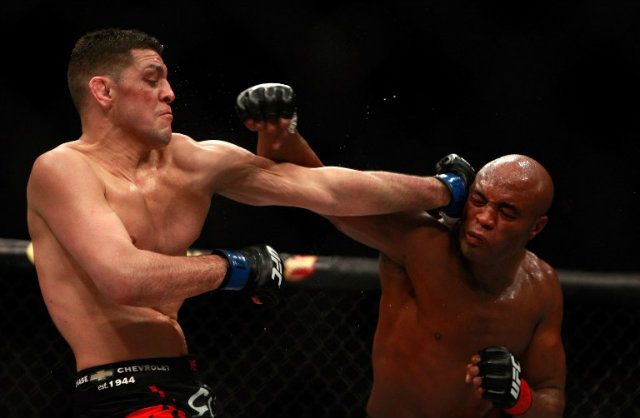 Facebook Twitter Copy URL
Copied
Silva, who had been sidelined since he fractured the tibia and fibula bones in his left leg, outpointed Diaz by a five-round unanimous decision

MANILA, Philippines – In his first fight since a bid to reclaim the world title that ended in a horrific broken leg, former middleweight champion Anderson Silva made a successful return to action by dominating Nick Diaz in five rounds at the UFC 183 pay-per-view event on Sunday, February 1 (PH Time) at the MGM Grand Garden Arena in Las Vegas, Nevada.

The 39-year-old Silva, who had been sidelined since he fractured the tibia and fibula bones in his left leg during a technical knockout loss to Chris Weidman at UFC 168 in December 2013, outpointed Diaz via unanimous decision with the scores of 49-46, 50-45 and 50-45.

“This is a very important moment for me and for my whole family. I’ve been through a lot of stuff in the past year. Everything I went through. In the beginning, I didn’t think I would be able to come back,” said Silva, who collapsed on the canvas in tears of joy after hearing the verdict.

As Diaz offered his customary theatrics from trash-talking to disco-rave hand motions, Silva provided glimpses of the man who once ruled UFC’s 185-pound weight class as he overwhelmed his opponent with his signature strikes.

Diaz struggled to deal with the Brazilian’s speed and precision as the volume punching for which he has always been known was nowhere to be found.

However, the 31-year-old native of Stockton, California showcased his resiliency in his attacks, firing hooks in short distance and covering up to weather the storm.

Right hands from Silva caused swelling near Diaz’ left eye by the second round, which turned into a gory gash in the third frame.

Seeing the blood on Diaz’s face, Silva turned up the notch by launching more leg and body kicks, a crisp jab and dizzying combinations that became prevalent as the bout progressed.

The 6-foot-2 “Spider” did not throw his left kick as much as he did prior to the injury, but he landed at least one left kick in each round, including a thrusting side kick that angered his foe. Silva mixed in several spectacular techniques as he attempted a vertical elbow shot and delivered an angled flying knee over Diaz’s shoulder.

Diaz offered his chin midway through the fifth and final round as he bled generously under his left eye from Silva’s solid head kick.

Silva authored a vindicating act in the dying minutes of the marquee match-up as he nailed close-quartered elbows, giving the cageside judges and the audience one last hurrah by which to remember his performance.

“Thank you God for giving me one more chance for being here,” Silva exclaimed in his post-fight interview.

With his victory over Diaz, Silva places himself back on the winning track after back-to-back setbacks and improves his record to 34-6.

Silva’s 17 career wins inside the Octagon now rank third on UFC’s all-time list, trailing only to Georges St-Pierre with 19 and Matt Hughes with 18.

Despite indications before the UFC 183 clash that a win over Diaz would earn him another shot at the middleweight championship belt, Silva remains uncertain in his next move.

On the other hand, Diaz loses his third-straight fight and downgrades his standing to 26-10, 1 NC. – Rappler.com