FEU Tamaraws barrel their way to the Finals 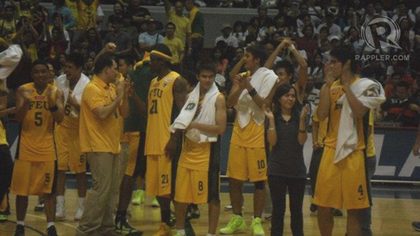 MANILA, Philippines — The Far Eastern University (FEU) Tamaraws are going to the Finals.

After defeating the second-seeded Adamson University (AdU) Falcons 78-74 in their do-or-die game today at the Smart-Araneta Coliseum, the Tams are on their way to their second UAAP championship in two years to face the Ateneo de Manila University (ADMU) Blue Eagles yet again.

A phenomenal showing by FEU’s reserves like Mike Tolomia, who came out with 19 points, helped secure them a win as did their domination of the boards. The Tams out-rebounded the Falcons 54-35.

Both teams were hot from the beginning. The Falcons and the Tamaraws exchanged baskets throughout the first quarter but FEU enjoyed a slight edge at the end of it, 18-14, when AdU struggled to get baskets

in during the last minute. The same intensity continued through the second quarter, except it was the Falcons who had the lead by halftime, 35-33, thanks to consecutive fouls by the Tams as the clock started running out.

The game had been close all throughout the first half but for FEU it was just not enough.

The Tams stepped up their offense and kept their defense tight in the third quarter, gaining a 10-point lead at one point, their biggest of the game. FEU led AdU 57-50 going into the final quarter.

FEU maintained their lead comfortably through most of the fourth quarter until a little more than two minutes left in the game, when Eric Camson, Jerick Cañada and Alex Nuyles started sinking shots one

after the other aided by steals that left FEU scrambling. With 1:44 remaining, the Falcons only tailed the Tamaraws by three points, 74-71.

It was FEU’s rebounds that won them the game.

With less than a minute left, Terrence Romeo missed a shot that would have extended their lead to five but an Aldrech Ramos rebound gave Tolomia a second chance to score. He missed. Russel Escoto rebounded once again for the Tams and passed the ball to Romeo, who Nuyles was forced to foul. Romeo sank both free throws, putting FEU up 78-74 with four seconds left in the game.

Cañada’s final shot for the Falcons didn’t go in, but the Tamaraw fans were already on their feet by then.

The Tams will try a second time to unseat three-time champion ADMU in the Finals starting next Saturday, September 24, in a best-of-three series. In last year’s championships, FEU fell to the Eagles after losing their first two games.

Romeo finished with 14 points, while Aldrech Ramos and Escoto had 10 points each for FEU.