Although he was coming off a three-straight stoppage setbacks, the 37-year-old Muñoz rejuvenated his physical top form as he empowered Barnatt in three round to sweep the judges’ sheets with the scores of 30-27, 29-28 and 30-27.

Muñoz overwhelmed Barnatt from start to finish with repetitive takedowns and solid overhand right to negate the length and height leverage.

With a disadvantage in height by six inches and in length from fist to armpit by 11 inches, Muñoz quickly scored a single-leg takedown before allowing Barnatt to return to his feet.

Muñoz did not allow Barnatt to create space between both of them as he closed in to pummel with heavy blows to the head along the Octagon’s fence.

A corkscrew takedown soon followed from Muñoz, who was looking to drop down more hammerfists while on the ground.

As Barnatt tried to stand up, Muñoz scooped him back to the floor and remained on top to clobber punches on the head.

Muñoz gave Barnatt what he wanted in the second frame as he stood toe-to-toe with the British combatant, but the Fil-Am grappler surprisingly outperformed his opponent by launching two thunderous overhand right that opened a floodgate of blood in his nose.

As he appeared to lose his steam, Muñoz negated Barnatt’s reach and resorted to his bread-and-butter by attaining a single-leg takedown. 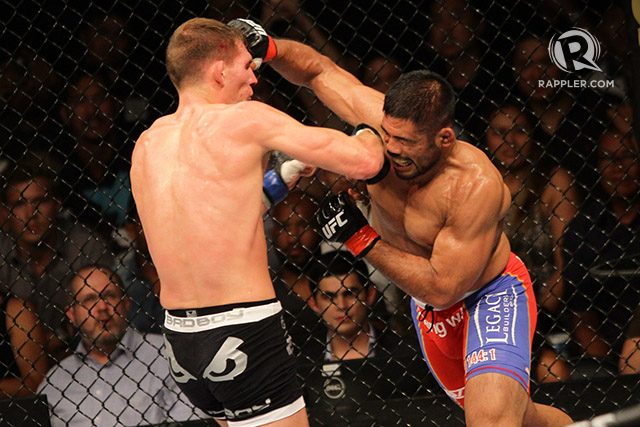 Barnatt sensed the urgency that he was down on the scorecards as he aggressively attempted to land a flying knee, but Muñoz intelligently stepped back and chose not to engage.

However, Muñoz surprised Barnatt with back-to-back right hands before smacking a haymaker that obviously rocked the 6-foot-6 behemoth.

The pro-Muñoz crowd erupted in the dying seconds of the 185-pound showdown when Muñoz scored another single-leg takedown and concluded it with his signature “Donkey Kong” ground-and-pound.

With the impressive victory over Barnatt, Muñoz snaps his three-fight losing skid and finishes his eight-year professional career with a record of 14-6.

On the other hand, Barnatt downgrades to 8-3 and has not won a match since his first-round technical knockout of Mats Nilsson in March 2014.

Filipino-American fighter Phillipe Nover gave the Philippines its first win of the night as he came out on top of Korean featherweight Yui Chul Nam in one of the supporting bout of UFC Fight Night 66 on Saturday, May 16 at the 20,000-seater SM Mall of Asia Arena in Pasay City, Metro Manila.

Nover took home a split decision with the scores of 29-28 each from two of the three judges after a come-from-behind performance from Nam.

The 31-year-old native of Brooklyn, New York compelled Nam to fight the pace that he was dictating as he outworked and trapped his Korean opponent against the cage, giving him the opening to score a double-leg takedown. Nover slammed Nam in the center of the cage and locked a triangle choke with the intent to make quick work on his Korean adversary.

However, Nam shrugged the lackluster performance in round one by swarming Nover and battering him with hammerfists in a crouch position.

Determined to close out the fight on a high note, Nover attained a double-leg takedown in the early proceedings of the third canto, but Nam turned the tables and situated himself on a dominant top spot, raining down heavy blows that his Fil-Am counterpart hardly evaded.

Nam was looking for the kill in the dying moments of the final round, where he fastened an arm-triangle choke that caught Nover in deep trouble.

With the surprising win over Nam, Nover (11-5-1) makes a triumphant return to the Ultimate Fighting Championship after five years of wandering outside the organization and competing in various promotions such as Bellator MMA and Ring of Combat.

In addition, he extends his winning streak to four fights.

On the other hand, Nam snaps his five-match victory parade and downgrades to 18-5-1.

Levan Makashvili (7-1) dominated Mark Eddiva (6-2) in three rounds to pull off a successful Octagon debut on the undercard of UFC Fight Night 66.

The 26-year-old Georgian scored his first takedown in round one, where Eddiva could barely hit his leg kicks and right straight-left hook combination.

As he constantly pushed Eddiva with his overhand rights, he capitalized a leg-trip when he trapped his Filipino foe along the fence.

In the second canto, a left jab from Makashvili caused a swelling underneath the right eye of Eddiva before the 5-foot-8 Mutant MMA representative scooped his opponent to the mat.

Makashvili mollified Eddiva in the third round as he dragged Eddiva to the floor with a corkscrew takedown and then punctuated the period with a double-leg takedown.

When the scores were announced, many cageside observers were surprised as Makashvili walked away only with the split decision win, despite overwhelming Eddiva with his wrestling the entire three-round featherweight tussle.

Makashvili was the late-replacement opponent of Eddiva, who was originally penciled to face American fight Alex White in UFC’s first trip to the Philippines.

“I’m going to go back to the gym and train to holistically improve. We focused only on wrestling [with last-minute switch of opponent]. In any case, I am still thankful to God,” Eddiva said in an interview. – Rappler.com