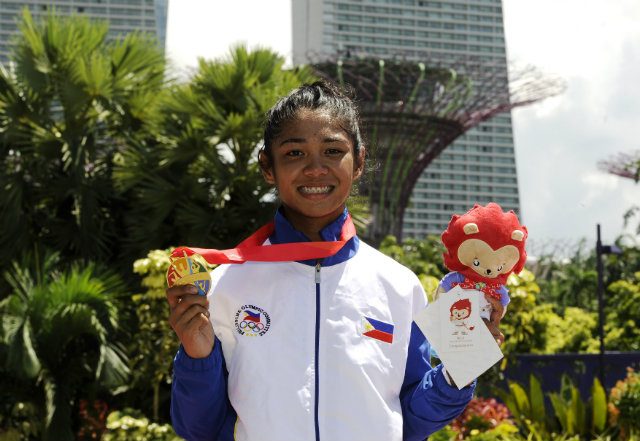 Only two years into the sport, Salamat, who used to be a promising bowler, had an amazing SEA Games debut in capturing the women’s individual time trial in runaway fashion in a time of 44 minutes and 46.38 seconds over the 30-kilometer in and around the Marin Bay area.

Even more amazing is that the 21-year-old UE dentistry student’s time was 45.96 seconds ahead – close to  kilometer in time trial terms- of Thailand’s Chanpeng Nontasin, the ITT champion and massed start medalist in the 2011 Indonesia SEA Games.

Singapore’s Chan Siew Keng, the ITT gold medalist in the Myanmar edition two years ago, likewise bit Salamat’s dust, clocking 2:58.53 to check in third place while the Filipina cyclist was already resting inside her team’s tent.

(“All my hard work bore fruit”)

She disclosed that it was national coach Cesar Lobramonte who coaxed her to take up the sport after spotting her one morning biking as cross-training workout with bowling coaches Edward Coo and Orlyn Batisin.

(“I was also had faith in myself on top of the extensive training I had back home.”)

“She’s (Salamat’s) a very strong rider and if given the proper attention, she could go a long, long way,” national team head coach Chris Allison, revealing that the new women’s ITT SEA Games trained with the male national cyclists back home.

Salamat’s gold medal was the only second for the country in the women’s cycling event of the SEA Games after Marites Bitbit, who annexed the gold in the massed start race in the 2007 Thailand SEA Games in Nakhon Rachashima.

Completely overshadowed by Salamat’s triumph was Mark Galedo, the reigning men’s ITT champion, who finished in sixth place in 56.21.29 over the 40-km. route.

“I lost my rhythm after the second lap” – Rappler.com