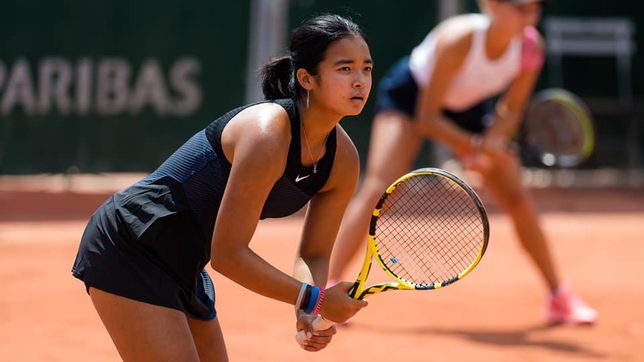 TOP SEED. Alex Eala and Oksana Selekhmeteva live up to their billing as the the top-seeded pair in the tournament.

Eala and Selekhmeteva defeated the pair of Serbia’s Petra Marcinko and Natalia Szabanin of Hungary, 7-6 (7), 7-6 (5), in the girls doubles quarterfinals.

After the top-seeded pair outlasted the European duo in the neck-and-neck first set, Eala and Selekhmeteva went up 4-1 before their opponents rallied back to knot the score at 4-4.

The second set extended to another tiebreaker which saw the Filipino-Russian pair close out the victory with three straight games with the last one seeing Eala on the service line.

The 16-year-old Filipina suffered a shock exit in the first round of the singles event, while Selekhmeteva is still in contention for the singles crown as she nailed a semifinal berth on Thursday.

In 2020, Eala became the first Filipino in 35 years since Felix Barrientos to make a Grand Slam juniors singles semifinal appearance at Roland Garros.

She is on track of winning her second Grand Slam title since the 2020 Australian Open girls doubles tournament, where she raised the trophy with Indonesian Priska Nugroho. – Rappler.com