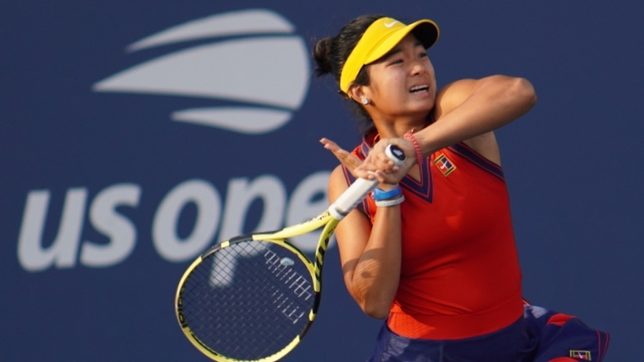 SLOWLY. Alex Eala slowly makes her way back to tennis action after injury.

MANILA, Philippines – Alex Eala played her last singles match of the year in the second round of the 2021 Junior Orange Bowl Tennis Championship in Florida.

The Filipina teen succumbed to Czech Republic’s Kristyna Tomajkova, 6-3, 6-3, in the girls singles event of the Grade A juniors tournament.

The 16-year-old Eala was sidelined for two months due to a foot injury after her stint in the US Open where she reached the quarterfinal.

She returned to tennis action in the women’s $25,000 tournament in Czech Republic last November, but made an opening-round exit.

Eala still made waves this year as she kicked off the year with her maiden pro title in the women’s $15,000 tournament in Manacor, Spain last January.

She then clinched her second Grand Slam title with Russian Oksana Selekhmeteva in the 2021 French Open juniors doubles tournament.

As the Rafael Nadal Academy scholar joined a mix of high-level juniors tournaments and women’s tournaments with the help of the International Tennis Federation (ITF) junior exempt program, she was able to close into the top 500 list in the Women’s Tennis Association (WTA).

Eala nailed her highest WTA ranking at No. 505 and returned to No. 2 in the juniors circuit last July after her 2021 French Open triumph.

Eala remains as the defending Australian Open juniors doubles champion after winning in 2020 with Indonesian partner Priska Nugroho as tournament organizers canceled this year’s juniors tournament due to the COVID-19 pandemic. – Rappler.com