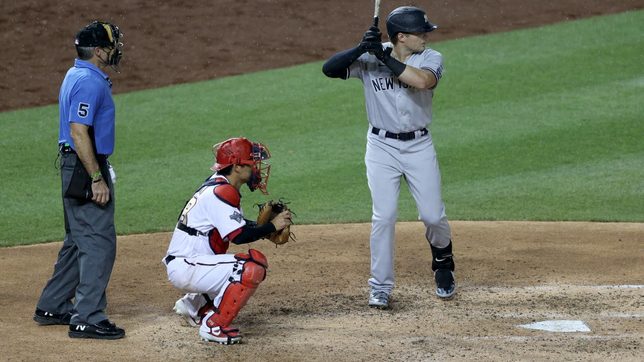 WASHINGTON, DC - JULY 23: Luke Voit #59 of the New York Yankees prepares to bat as rain starts to fall against the Washington Nationals during the sixth inning in the game at Nationals Park on July 23, 2020 in Washington, DC. Rob Carr/Getty Images/AFP

Major League Baseball’s coronavirus-delayed season got underway on Thursday, July 23, with players lining up to take a knee in a gesture of solidarity with the Black Lives Matter movement.

Four months after the COVID-19 pandemic shelved the start of the 2020 campaign, baseball returned with the Washington Nationals hosting the New York Yankees before the Los Angeles Dodgers entertained the San Francisco Giants.

Both games took place in eerily empty ballparks, a striking contrast to the celebratory atmosphere that normally accompanies the opening day festivities of the sport regarded as America’s pastime.

At both Nationals Park in Washington and Dodger Stadium in Los Angeles, players took part in a pregame tribute to Black Lives Matter, dropping to one knee while lifting a giant black banner in unison.

In Washington, all players on the field then got to their feet to stand for the US national anthem.

But in Los Angeles, the Dodgers’ newly signed African-American star Mookie Betts remained on one knee, with teammates Cody Bellinger and Max Muncy each resting a supportive hand on his shoulder.

Several members of the Giants’ playing and coaching staff also knelt during the anthem.

“It was a really important, unifying moment for the players and staff on both sides,” said Giants manager Gabe Kapler, who was among those who knelt.

“It was good to be around players who are so committed to changing the current state of systemic racism in our country.”

The United States has been convulsed by nationwide protests against racism and police brutality after the May 25 death of unarmed African-American man George Floyd in Minneapolis at the hands of police officers.

Taking a knee has become a widely recognized symbol of support for Black Lives Matter, adopted by protesters and professional athletes around the world in the weeks since the protests erupted.

Kneeling was first used as a gesture of protest by former NFL player Colin Kaepernick in 2016, who was vilified by President Donald Trump for his protests against racial injustice.

Thursday’s season-opening games marked a long-awaited return to baseball after months of uncertainty during the coronavirus shutdown that at times threatened to scupper the entire season.

After bitter wrangling between team owners and players, an abbreviated 60-game season was mandated by MLB commissioner Rob Manfred.

Games are taking place without fans, while players are subject to a range of strict health and safety protocols designed to prevent outbreaks of COVID-19.

Players will be tested for the disease every 48 hours, while masks will be mandatory for all players not on the field of play.

Thursday’s game in Washington, meanwhile, was marked by an appearance from US infectious disease specialist Anthony Fauci, a devoted fan of the World Series-winning Nationals, who tossed the ceremonial first pitch to get the season underway. Fauci’s pitch went way wide of the catcher.

COVID-19, meanwhile, struck a blow to the Nationals earlier Thursday after it emerged star outfielder Juan Soto had tested positive for the disease.

Soto’s absence was felt on the field by Washington, who slumped to a 4-1 defeat in a game that was called off after torrential rain halted play after the 5th inning with the Yankees leading.

In Los Angeles, meanwhile, the Dodgers romped to an 8-1 defeat of San Francisco. – Rappler.com