Facebook Twitter Copy URL
Copied
Jonas Sultan knows he might be a huge underdog, but the rising Filipino boxer hopes to get a chance to challenge Japanese star Naoya Inoue

Jonas Sultan’s hit list has Naoya Inoue at the top. Other foreign fighters follow with the other Filipino champions way below.

That’s because Inoue is touted as the world’s best bantamweight and Sultan wants the Japanese Monster’s WBA and IBF crowns.

Sultan knows he would be the huge underdog against Inoue and relishes the challenge.

“Face your fear,” Sultan said during a party tendered by his manager Junnie Navarro Thursday night, November 25, for his victory over the erstwhile unbeaten Carlos Caraballo in their battle for the WBO intercontinental 118-pound title on October 30 at the Madison Square Garden in New York. 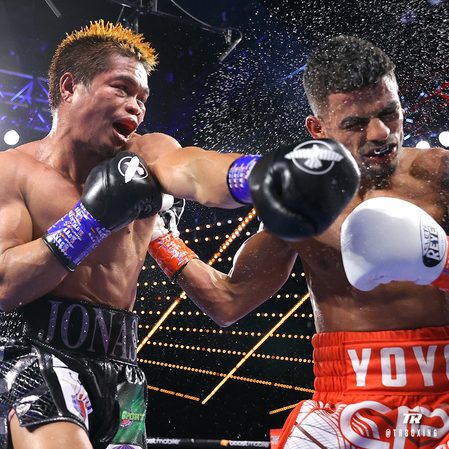 If ever he gets the crack at Inoue, Sultan promised he would look for and find the Japanese’s vulnerable spot.

“All boxers can be hit and get hurt,” Sultan reasoned out in Filipino. “Everyone has a weakness and there’s always a way to win. You just need to prepare real hard.”

According to Sultan, he may not be the best but he’s still evolving as a fighter.

“Before I’m a head hunter, now I’m learning to be a body puncher. I need to strengthen my body. I will keep by awkward, rugged style, but will add new techniques, especially those I learned from Jerwin (Ancajas) and coach Joven (Jimenez).”

Originally slated to fly back to the United States on Friday, Sultan will return to Los Angeles on December 6 to rejoin Ancajas, who’s training for his super flyweight unification against four-division world champion Kazuto Ioka on December 31 in Tokyo.

MP (Manny Pacquiao) Promotions president Sean Gibbons has promised Sultan his next ring stint would either be an eliminator or a world title fight, depending on the outcome of three major bouts next month.

Inoue will defend his titles against Thai Aran Dipaen on December 14 in Tokyo.

This early, Sultan said he will only fight a compatriot as a last resort.

According to Navarro, he’s looking at Sultan having three or four fights next year but is leaving the matchmaking to Gibbons.