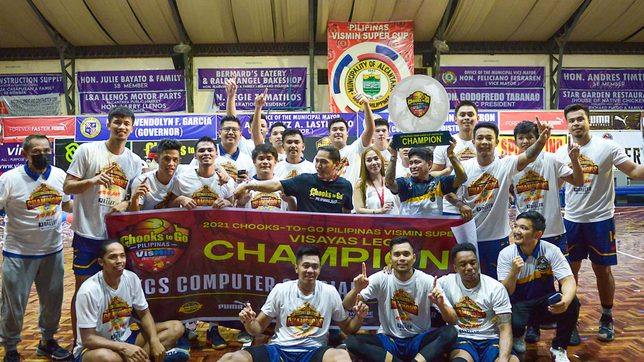 CHAMPS. Mandaue rules the Visayas leg of the 2021 VisMin Cup.

Facebook Twitter Copy URL
Copied
Top teams from the MPBL, NBL, and VisMin Super Cup look to battle for the national crown in the Champions League

In an attempt to unify the Philippines’ basketball scene, sports patron Ronald Mascariñas is planning to host a Chooks-to-Go Champions League involving the MPBL, NBL, and VisMin Super Cup.

“Once quarantine restrictions are eased, we will launch the Champions League where the top teams from each of the three leagues will compete to be the national champion and the best ‘Manok ng Bayan’,” said Mascariñas in a press conference on Saturday, June 12.

Mascariñas bared that it was a fan-driven initiative, and that his company was listening to what their fans wanted.

“After all, we are doing this primarily for the fans. Today, we sat together for Philippine basketball and basketball fans,” he said.

Despite the optimism, however, Chooks-to-Go has yet to clear multiple logistical hurdles to make the Champions League a reality, as the MPBL, NBL, and VisMin Super Cup all have their own tournaments tentatively set to start in the next four months.

Mascariñas, who is also the owner of the Chooks-to-Go Pilipinas 3×3 pro league, then took his call for unity a step further, as he invited the PBA to join its 3×3 tournaments, in addition to also opening its doors for the MPBL, NBL, VisMin, and other interested clubs.

“Together, we will pave the road to the 2024 Paris Olympics, while each team will have a chance to compete in the FIBA 3×3 pro circuit,” he said.

However, in the same press conference, he also openly ripped the PBA and the Samahang Basketbol ng Pilipinas (SBP) for its handling of Gilas Pilipinas 3×3 and the national team’s cellar-dwelling finish in the 2020 Olympic Qualifying Tournament.

Three years after Chooks-to-Go blazed a trail as the sole major 3×3 league in the country, the PBA is now tipping off its own 3×3 division as soon as they get the green light from the Inter-Agency Task Force (IATF) to launch a new season.

Given the tension still present from the two sides, it remains to be seen whether or not they can truly cooperate in the near future for the sake of the country’s 3×3 Olympic dream. – Rappler.com