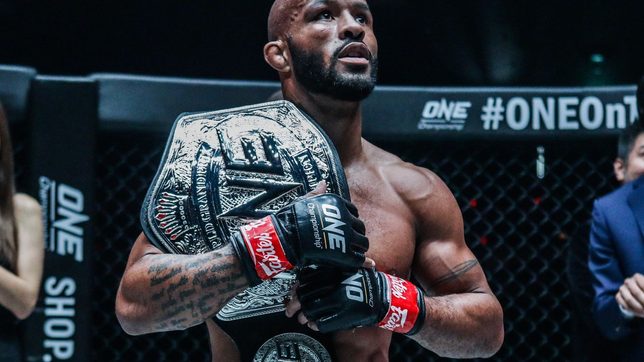 ICON. Demetrious Johnson banks on his explosive wrestling and submissions.

The best of both worlds are set to collide when ONE Championship celebrates its milestone 10th anniversary.

ONE chairman and CEO Chatri Sityodtong announced three of the fights expected to take place at ONE X on Ariel Helwani’s “The MMA Hour.”

“It’s going to be the biggest and most unique show in the history of the company. I think it’s going to be something crazy fun all over the world,” Sityodtong said.

The first round will take place in Rodtang’s backyard under Muay Thai rules. If Johnson survives Rodtang on the feet, then the next round will be contested under mixed martial arts rules.

Should neither fighter be knocked out or submitted in the first two rounds, it will go back to Muay Thai in the third and wrap up with MMA in fourth. Moreover, they’ll both be competing with 4-ounce gloves.

“Rodtang – his record is 267 wins and 42 losses in Muay Thai – he’s literally the hottest KO striker on the planet when it comes to striking arts right now. He’s 10-0 in ONE and he’s the World Champion, and he has three minutes to knock out DJ,” Sityodtong said.

“We want to do something fun that would commemorate martial arts in a way that celebrates all of mixed martial arts and history, not just our ten year history.”

Aside from the hybrid clash, two World Titles will also be at stake on the anniversary card.

ONE Bantamweight World Champion Bibiano “The Flash” Fernandes returns to action as he takes on top-ranked John “Hands Of Stone” Lineker in an all-Brazil match for divisional supremacy.

Fernandes has ruled the division for as long as the company has existed, and he’ll be facing his biggest challenge yet in Lineker, who has talked big and performed even bigger since making his debut last year.

ONE Featherweight World Champion Thanh Le also defends his strap for the first time when he battles American submission wizard and No. 3 Garry “The Lion Killer” Tonon. – Rappler.com

Watch ONE: Revolution live on One Sports or One Sports+ beginning with the lead card at 6:30 pm Philippine Standard Time (PHT) on Friday, September 24.

The full event stream will also be available on ONE’s YouTube channel and the ONE Super  App.