Djokovic marches on as rivals struggle in Tokyo heat 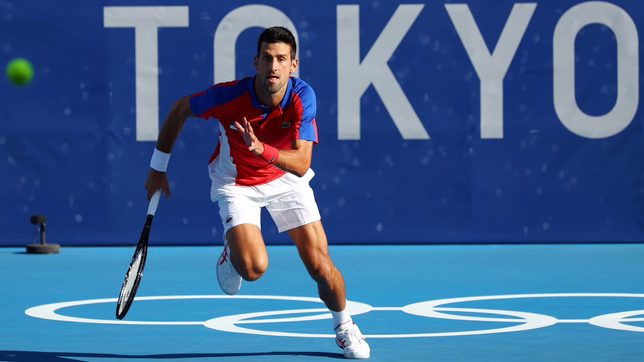 Novak Djokovic of Serbia in action during his third round match against Alejandro Davidovich of Spain in the Tokyo 2020 Olympics.

Novak Djokovic moved one step closer to a historic Golden Slam on Wednesday, July 28, advancing into the Tokyo 2020 men’s singles quarter-finals as other competitors struggled in hot and humid conditions.

Medvedev, competing for the Russian Olympic Committee (ROC) team, was leading 5-2 in the first set when he requested a medical timeout.

“Even from the first set, I didn’t feel good enough with my breathing,” said the 25-year-old, who will next meet Spain’s Pablo Carreno Busta.

“That’s why I called the physio, I felt like my diaphragm was blocked.”

Djokovic, who took to the court later in the afternoon, had a comparatively easier time, with a comfortable 6-3 6-1 win over Spain’s Alejandro Davidovich Fokina.

The 34-year-old Serbian, who is aiming to become the first man to win all four Grand Slam titles and Olympic gold in the same calendar year, will next play Japan’s Kei Nishikori, who moved past Ilya Ivashka of Belarus 7-6(7) 6-0.

Nishikori, who won the bronze medal at the Rio Games in 2016, is the host country’s last remaining hope for a singles medal after women’s number two Naomi Osaka lost in a third round upset on Tuesday.

Greece’s Tsitsipas was unable to recover after taking a nasty tumble during a second set tiebreak against Frenchman Ugo Humbert, losing 2-6 7-6(4) 6-2.

The 22-year-old, who reached the men’s final at Roland Garros before losing to Djokovic, will compete in the mixed doubles with Maria Sakkari later on Wednesday.

In the women’s singles, Pavlyuchenkova of the ROC was beaten 6-0, 3-6, 6-3 in the quarter-finals by Switzerland’s Belinda Bencic, who will face Kazakh Elena Rybakina for a spot in the gold medal match.

Ukraine’s world number six Elina Svitolina, the fourth and highest surviving seed in the women’s singles draw, also advanced with a 6-4 6-4 win over an error-prone Camila Giorgi of Italy.

“You know when you are higher ranked everyone wants to beat you and everyone is extremely motivated to beat you,” she said.

“…I just try to focus on my game and not think so much about what’s going on in the other side of the net.”

She next plays Czech Marketa Vondrousova, who advanced after her Spanish opponent Paula Badosa retired due to heatstroke.

In the men’s doubles quarter-finals, Britain’s Andy Murray and Joe Salisbury lost to Croatians Marin Cilic and Ivan Dodig 4-6, 7-6(2), (10-7) in a supertiebreaker. – Rappler.com