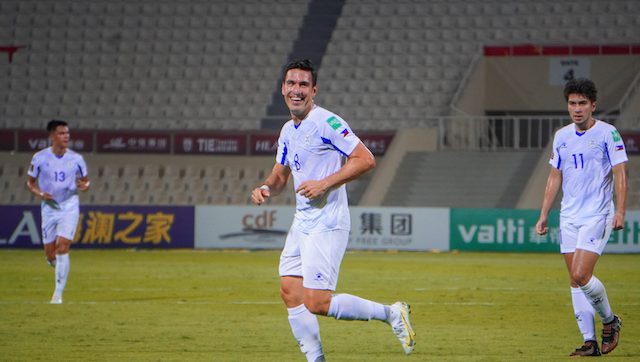 Despite falling short of advancing to the next qualifying round for the 2022 FIFA World Cup campaign, the Philippine Azkals has booked an outright berth in the third round of the 2023 Asian Cup qualifiers after drawing with Maldives, 1-1, on Tuesday, June 15, at the Sharjah Stadium in the United Arab Emirates.

Angel Guirado opened the scoring festivities at the 19th minute with a well-taken right-footed shot at the edge of the penalty arc.

Team captain Stephan Schrock lobbed a cross inside the penalty box, but it was a Maldives player who connected with it initially. Defender Samooh Ali produced a weak headed clearance and Guirado capitalized on this error by reacting quickly and smashing the ball past Mohamed Faisal, Maldives’ starting goalkeeper.

Maldives equalized at the 24’ mark after a beautiful team goal created by Hamza Mohamed, Ali Fasir, and Ali Haisam. Mohamed was dribbling around the left wing and passed it to Fasir – who immediately played a swift one-two with Haisam.

The latter went down after a crunching tackle by a Filipino, but it was a good advantage call by the referee as Fasir breezed past Justin Baas and slotted the ball near the bottom right corner of the goal.

The Azkals finished the 2022 FIFA World Cup and 2023 Asian Cup joint qualifiers at third place in Group A with 11 points and +1 goal difference.

Two of their victories were against Guam and the other one was versus Maldives back in November 2019. The Philippines drew against China in Bacolod back in October 2019, but lost in Sharjah Stadium just a week ago when the tournament resumed.

After their loss against the Chinese last June 8, Philippine national football team head coach Scott Cooper said that they at least wanted to equal the points record earned by an Azkals team in a World Cup qualifier and finish with a spot worthy of an Asian Cup qualifying berth.

They achieved both objectives in their previous game versus Guam with a 3-0 scoreline, but coupled with their latest result, the Azkals have now re-written the record with 11 points – one point more compared to the total that their predecessors managed to obtain in the 2018 FIFA World Cup qualifiers.

Maldives, meanwhile, ends the tournament at fourth with 7 points and -13 goal difference. The two wins that they picked-up came at the expense of last placed Guam, who finished the joint qualifiers with 0 points and a -32 goal difference in Group A.

The first two minutes of the match saw both teams attempting a shot each, but Guirado and Fasir’s efforts yielded no goals. Maldives continued to push for an opener with Mohamed now testing the Philippines defense at the 10th minute.

A minute later, Maldives had a shot on target, but Aisam Ibrahim’s long-range strike went directly straight at Schipmann after a slight deflection from Mark Winhoffer.

Mark Hartmann, who scored a wonderful free kick in their previous game against Guam, saw his free kick at the 20th minute travel directly straight at Faisal. It could’ve been the Azkals’ second goal of the match, but the Maldives goalkeeper did well to keep the deficit at 0-1.

Hartman had another chance to score at the 40th minute, but his header from a Michael Kempter cross looped over the bar. Ali’s header two minutes prior was also way off the mark as both teams failed to break the deadlock heading into the last 45 minutes of the match.

The second half started with a myriad of substitutions as the Azkals brought in Mike Ott, Martin Steuble, and Kevin Hansen for Guirado, Winhoffer, and Schipmann. Maldives, on the other hand, brought in Mohamed Umair for Ibrahim.

Hansen was instantly called into action four minutes into the half as he came out of his box to clear the ball for the Azkals. Ott, the other Filipino substitute, had three chances to nail the winner, but only one of his attempts was on target.

Ott’s first chance was provided by Schrock with a cross, but his fancy flick from behind did not go as planned. The second was a close-range attempt from a corner, but he slightly mistimed his kick. The final chance came from a patient play at the back for the Azkals as the final pass landed to Ott, but his powerful shot outside the box went straight at the Maldives keeper.

In the 88th minute, Schock played a one-two with Reichelt, but the former’s left-footed shot just went slightly off the bottom right corner and resulted in a goal kick.

The Philippines team captain created another chance towards the end of the match with a headed pass to Ott, who rapidly played a good ball for Gayoso, but the youngster could not get to his second touch fast enough as Ali produced a great clean tackle to secure the point for his country. – Rappler.com