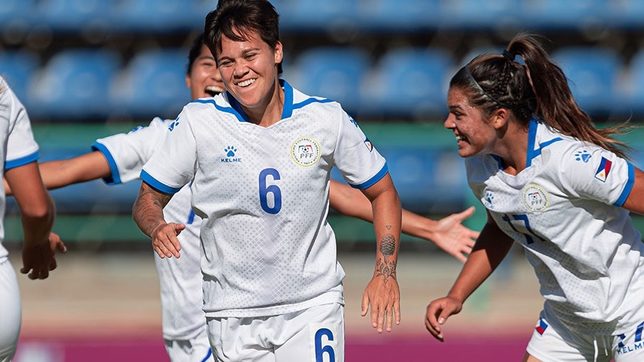 QUALIFIED. The Philippines joins 11 other teams in the 2022 AFC Women's Asian Cup.

The Philippine women’s football team barged into the 2022 AFC Women’s Asian Cup following a brilliant 2-1 win over Hong Kong at the JAR Stadium in Tashkent, Uzbekistan on Friday, September 24.

Chandler McDaniel and Tahnai Annis both found the back of the net as they swept Group F of the qualifiers to finish with 6 points and advance to the quadrennial meet for the second straight edition.

Delivering a crucial goal in the Philippines’ come-from-behind 2-1 victory over Nepal on September 18, Annis rose to the occasion anew after putting the Filipina booters ahead, 1-0, at the 16th minute.

Hong Kong, though, equalized at the 61st minute as Chung Pui Ki drilled in a goal off a free kick.

Despite allowing a goal, the Philippines remained in a favorable position as it needed only a draw to top Group F after Hong Kong and Nepal figured in a draw in their match to earn 1 point each.

McDaniel, though, did not want to give Hong Kong a chance to pull off a comeback win, beating two defenders for the go-ahead goal at the 88th minute – her first as a member of the national team.

Officials added three minutes of extra time but the Philippines denied Hong Kong of all its attempts to equalize.

As it qualified for the Women’s Asian Cup, the Philippines will be one of the 12 teams that will contend for five spots allotted for the continent in the 2023 FIFA Women’s World Cup.

The Women’s Asian Cup will be hosted by India from January 20 to February 6 next year. – Rappler.com