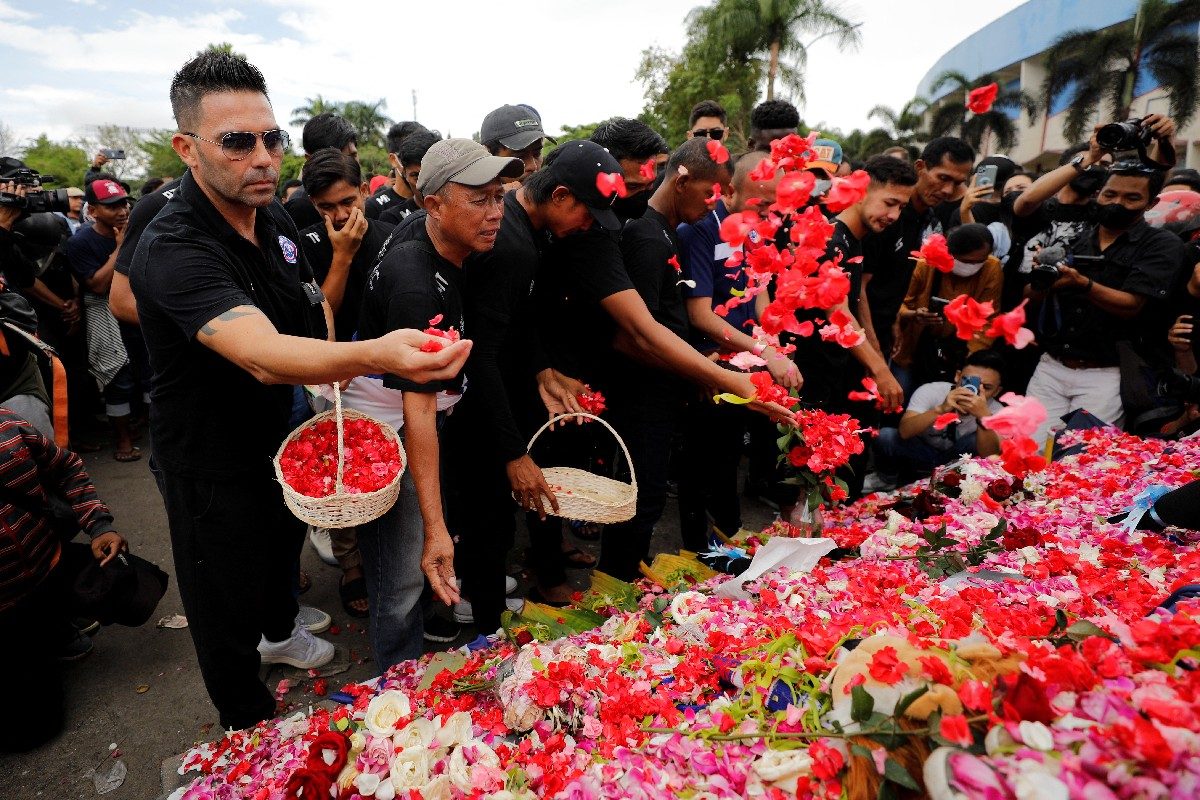 TRIBUTE. Arema FC players and officials put petals on a monument as they pay condolence to the victims of the riot and stampede following a soccer match between Arema vs Persebaya, outside the Kanjuruhan stadium in Malang, East Java province in Indonesia.

Facebook Twitter Copy URL
Copied
The stadium incident has sparked outrage and grief in Indonesia, where sports commentators and activists have slammed what they see as an excessive use of force by police, and authorities have pledged to investigate

At least 125 people died over the weekend in Indonesia when a soccer match between two teams that were fierce rivals ended in a stampede, marking one of the world’s worst stadium disasters in recent decades.

The incident in East Java province has sparked outrage and grief in Indonesia, where sports commentators and activists have slammed what they see as an excessive use of force by police, and authorities have pledged to investigate.

Questions are being asked about locked gates at the stadium, which was packed well over capacity, and about holding a match that local football experts had identified as “high risk” due to the bitter rivalry between the two teams.

What happened at the match?

The match between the home team Arema FC and Persebaya Surabaya ended with the former losing 3-2, a huge upset given that Arema had not lost a home game to Persebaya in 23 years, according to police and a local soccer expert.

The outcome angered many in the crowd, which consisted almost entirely of Arema supporters after the police had banned Persebaya supporters from attending for fear of violent clashes.

Agitated Arema FC fans streamed onto the pitch after the match to vent their frustration, prompting clashes with police, who fired tear gas to try and disperse them.

The tear gas sent waves of panic through the crowds, with many caught up in a deadly crush as they tried to escape. Authorities say 125 people were killed, including 32 minors.

Why was the death toll so high?

The severity of the stadium disaster was due to a confluence of factors, including a venue packed beyond capacity, poor safety planning, and a lack of communication among organizers and police.

While the stadium in Malang has several exit gates, spectators told Reuters that some of these were locked during Saturday’s match, causing bottlenecks and chaos as fans tried to flee. Medics said some of the victims died of suffocation, while others suffered head injuries.

Police at the stadium are also facing scrutiny for using tear gas, banned by world soccer governing body, FIFA. Police in Indonesia occasionally use tear gas to disperse street demonstrations but tend not to do so at sporting events.

How does it compare with other sporting disasters?

Indonesia has a history of violence and football hooliganism, especially in major urban centers such as Jakarta, but the scale of this incident is unprecedented, ranking among the worst globally in recent decades.

In 1964, 328 people were killed when Peru hosted Argentina at the Estadio Nacional in Lima, while in the late 1980s, 96 Liverpool supporters were crushed to death when an overcrowded and fenced-in enclosure collapsed at the Hillsborough Stadium in Sheffield.

Indonesia’s chief security minister Mahfud MD has formed an independent fact-finding team to investigate the stampede, while President Joko Widodo has ordered the country’s football association to suspend all games in the top league, known as Liga 1.

FIFA has requested a report on the incident, which it described as a “dark day for all involved.”

The government will provide 50 million rupiah ($3,268) in compensation to each of the victims’ families, while hundreds more who were injured will be treated for free.

There are also growing calls for the police and football organizations to formulate ways to work more closely to prevent similar disasters in future. – Rappler.com