AJ Edu aims to be stronger, better in comeback 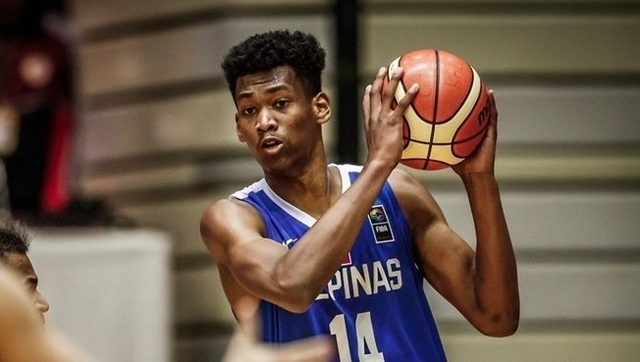 Gilas Pilipinas Youth stalwart Ariel John “AJ” Edu made the most out of the time he had to sit out due to an anterior cruciate ligament (ACL) injury he sustained in the FIBA Under-19 World Cup.

Edu immersed himself in rehabilitation seeking to come back stronger and devoted himself to his studies, which resulted in him cracking the Dean’s List in his sophomore year in college.

“I have always believed God has a plan for me and that everything happens for a reason. I have looked at my injury as a blessing in disguise – a whole year to work on my body and my game and come back better than ever,” Edu said.

“That mentality has kept me positive throughout this time even though I do miss playing.”

Prior to his injury, Edu finished his freshman year with the University of Toledo Rockets earning a spot in the Mid-American Conference All-Freshman Team and leading the team in blocks with 1.7 swats per game.

He achieved these despite averaging only 14.3 minutes off the bench.

Toledo head coach Tom Kowalczyk was all praise for Edu.

“I thought he was a really good defender as a freshman. That is so rare that a freshman is a good defender. I think he has the chance to be an elite defender,” Kowalczyk said.

“He has elite shot blocking ability. He has great toughness and is really good in ball screens,” the coach added. “He is a good defensive rebounder. He brings a little more versatility that we have been accustomed to.”

That’s why it’s no wonder all eyes were on Edu when he formed an imposing twin tower combination with NBA G League-bound Kai Sotto in the FIBA Under-19 World Cup for Gilas Youth in 2019.

With Edu and Sotto on the frontcourt, expectations were high for arguably the strongest Philippine youth team ever assembled.

But just two minutes into the Philippines’ first game against host country Greece, Edu found himself writhing in pain on the floor, clutching his right knee after a drive attempt.

“I just knew right away what it was. I felt the pop and the pain was really bad. I was trying to deny that it was a torn ACL but deep down, I knew,” the 20-year-old recalled.

Edu was born in Cyprus to a Filipina mother from Surigao, Josie Litang, and a Nigerian father, Ayotunde, a university professor who taught mathematics and physics.

He has a younger brother, Femi, who last May was named Most Valuable Player of an under-14 tournament in England after averaging 17.6 points for the Essex Junior Rebels.

A young Edu grew up playing both football and basketball but eventually shifted his focus to hoops when he turned 7 years old because he knew he was going to be tall.

The Edu family eventually moved to England where he continued to develop his game and gain notice from international scouts.

Playing basketball in a country more known for football and the Wimbledon entailed young players like Edu to be persistent and creative.

“A big challenge I faced in England was just getting court time to myself outside of practice,” he said. “Basketball is growing there but is definitely not a priority so it can be hard and expensive to get access to facilities. But we made it work.”

His perseverance opened a lot of doors.

The 6-foot-10 Edu became one of the most sought-after young prospects from England and was invited to the NBA Basketball Without Borders camp held in Los Angeles in 2018.

In the same year, Edu saw action in the FIBA 3×3 Under-18 World Cup and FIBA Asia Under-18 Championship.

He normed 14.2 points and a tournament second-best 11.5 rebounds in the FIBA Asia Under-18 Championship to help the Philippines clinch a fourth-place finish and a spot in the FIBA Under-19 World Cup.

Edu remains confident he can regain the form that made him one of the most intimidating rim-protectors in the US NCAA and a strong bet for a Gilas Pilipinas slot in the 2023 FIBA World Cup.

He has set lofty goals for himself and he is determined to achieve them all.

“The Toledo program has done everything except one thing and that is to make it to the NCAA tournament. The team and I have the goal to change this,” Edu said.

“I am always ready to play for Gilas when I am available. The 2023 World Cup is something I think about all the time. My goal personally has always been and still is to play in the NBA one day.” – Rappler.com