Facebook Twitter Copy URL
Copied
The fearless Gilas Pilipinas almost pulls off the improbable after giving world No. 5 Serbia a run for its own money in the FIBA Olympic Qualifying Tournament 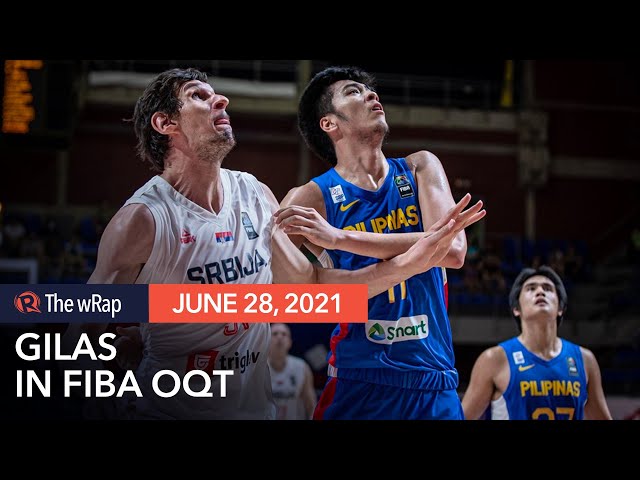 The tenacious Filipinos momentarily held the lead in the fourth quarter only to witness the world No. 5 Serbians rely on NBA big man Boban Marjanovic to bring them home.

Marjanovic of the Dallas Mavericks scored 8 of his 25 points in the final four minutes as Serbia, which toppled the Dominican Republic the day before, improved to 2-0 for the top seed in Group A.

Buried by as many as 16 points, the Philippines stunned the hometown crowd at the Aleksandar Nikolic Hall as RJ Abarrientos gave his side a 74-73 advantage with 3:50 minutes left.

However, Serbia quickly regained the upper hand off back-to-back buckets from the 7-foot-3 Marjanovic, who also finished with 11 rebounds.

Justine Baltazar trimmed the Philippines’ deficit to a whisker, 76-77, but it did not help the Filipinos’ cause when he and SJ Belangel muffed open three-pointers that would have given them back the lead.

Marjanovic then sealed the win for Serbia with another pair of buckets, the last of which was a turnaround hook shot over Angelo Kouame with 36 ticks remaining.

Kouame led the way for the Philippines with 17 points, 7 rebounds, and 3 blocks, while Jordan Heading chimed in 13 points on a 4-of-5 clip from long range to go with 3 assists.

Kai Sotto also delivered in the losing effort with 10 points, 5 rebounds, and 2 blocks, while Baltazar added 10 points and 4 rebounds.

But the all-cadet crew hardly looked intimated as they swung a 40-56 deficit in the third quarter to a 67-67 deadlock early in the final salvo off a Carl Tamayo triple and a Mike Nieto bucket.

Ramos sat out against Serbia as he continues to recover from a strained groin he suffered a week ago.

Meanwhile, Serbia did not field Miami Heat forward Nemanja Bjelica and Nikola Kalinic due to “blows” they sustained against the Dominican Republic.

With only the top two teams advancing to the knockout rounds, the Philippines needs to beat the Dominican Republic on Friday, July 2 (Manila time) to clinch the last semifinals berth available in Group A.