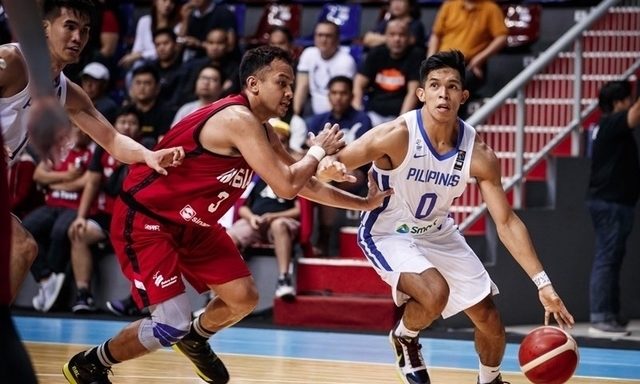 FUTURE. Thirdy Ravena powers his way to 23 points in just his second game for Gilas Pilipinas.

Gilas Pilipinas’ young guns proved worthy of their spots in a hard-fought 100-70 road victory over Indonesia in the FIBA Asia Cup 2021 Qualifiers on Sunday, February 23, in Jakarta.

Thirdy Ravena, one of the 5 amateur players in the 12-man lineup, put up 23 points, 8 rebounds, and 2 blocks as the Philippines opened the first window of the qualifiers with a 1-0 record in Group A.

Despite playing only his second game for Gilas Pilipinas, Thirdy looked comfortable in the international stage after scattering 13 points in a fiery third-quarter charge that saw his side pull away for good.

Indonesia, inspired by its home crowd at the Britama Arena, narrowed the gap to 51-55 before Thirdy took over, scoring 5 straight points in a 12-2 run that opened the floodgates entering the last frame.

Roger Pogoy extended that lead to 77-57 by sinking a triple – setting up the lopsided win as the Philippines went on a blistering 17-5 run to gain its biggest lead of the game at 94-62 with two minutes left.

Pogoy backstopped Thirdy with 16 points and 6 rebounds, CJ Perez chimed in 11 points, 7 rebounds, and 4 steals, while Kiefer Ravena chalked up 10 points, 4 steals, and 3 assists in the win.

Gomez de Liaño finished with 10 points and Ramos filled up the stats sheet with 5 points, 5 rebounds, and 2 steals.

Andakara Prastawa paced Indonesia with 28 points and 6 rebounds, but he did not have enough help as Abraham Grahita was his only teammates to wound up in double figures with 17 points and 2 steals.

Indonesia, which wrapped up the first window with a 0-2 card, badly missed the services of key players Lester Prosper and Brandon Jawato, whose naturalization are still being processed.

Gilas Pilipinas’ match against Thailand, which was scheduled on February 20 but was called off due to the novel coronavirus outbreak, has yet to get a new date.

The second window of the 24-team qualifiers is slated in November.