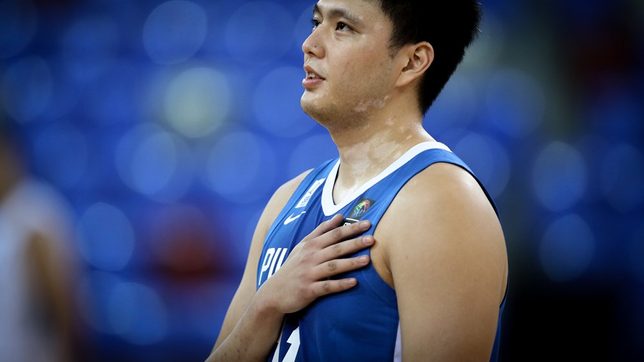 MAINSTAY. Isaac Go has played in all of Gilas Pilipinas' games in the FIBA Asia Cup Qualifiers.

Isaac Go will serve as Gilas Pilipinas’ team captain in the third window of the FIBA Asia Cup Qualifiers as injured Rey Suerte sits out.

Suerte, the previous captain, will not see action after sustaining an ankle sprain just a week before the last leg of qualifiers kicks off in Clark, Pampanga, on Wednesday, June 16.

Loaned to the national team as the No. 1 pick in the special PBA Draft two years ago, Go played in all of their three games in the qualifiers.

He helped Gilas Pilipinas seize a perfect 3-0 card for the top spot in Group C.

The 6-foot-7 big man from Ateneo averaged 5 points, 7 rebounds, and 1.3 rebounds in the first two windows.

In the third window, Go and the Nationals need to win at least one of their last three games to qualify for the Asia Cup, with the top two teams from each group advancing.

The Philippines will face South Korea on Wednesday and on Sunday, June 20, and Indonesia on Friday, June 18. – Rappler.com