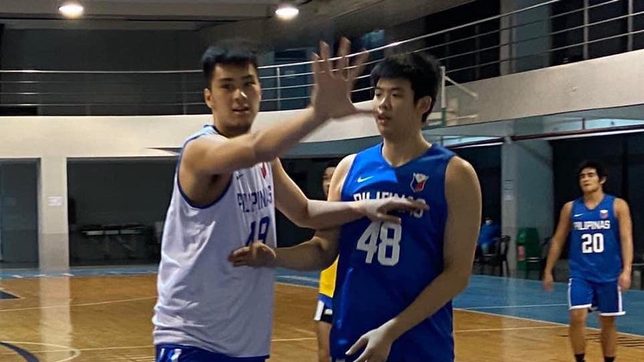 UNCERTAIN. Whether Sotto will see action in the FIBA Asia Cup Qualifiers will be decided soon.

Facebook Twitter Copy URL
Copied
'It took me just a couple of days to learn all of coach Tab's systems, plays, and defensive schemes,' Sotto says

It did not take long for Kai Sotto to acclimate himself to Gilas Pilipinas.

Despite joining the national team only recently, Sotto seamlessly transitioned to the system head coach Tab Baldwin will employ in the third and final window of the FIBA Asia Cup Qualifiers.

The 7-foot-3 big man arrived in the country last May 31 and completed his mandatory quarantine just days before the Philippines’ first game in the third window against South Korea on Wednesday, June 16.

“For me, I don’t really find anything hard to learn. I think that’s one of my strengths, I’m a fast learner and I’m very fast to adjust,” Sotto said.

“It took me just a couple of days to learn all of coach Tab’s systems, plays, and defensive schemes.”

Whether Sotto will see action in the Asia Cup Qualifiers will be decided by the team soon.

For the 19-year-old, he is ready to suit up for the national team, thanks in part to the assistance of Sandy Arespacochaga, his head coach back when he still played for Gilas Youth.

“It’s been easier because coach Sandy is by my side in the process, helping me and telling me what I should or should not do. For now, it’s been really good,” Sotto said.

Familiarity will also not be an issue for Sotto as he has already shared the floor with several members of the Gilas pool, including SJ Belangel, Carl Tamayo, and Geo Chiu.

“I’ve played with most of them before. To see everybody, that we will play for the national team, is a really good feeling for me,” Sotto said in a mix of Filipino and English.

“I’m very excited to play with them again. It’s just a lot of really good young talent in this team.” – Rappler.com